A dual diagnosis, often referred to as co-occurring disorders, is when someone is diagnosed with a substance use disorder and some other form of mental illness. Dual diagnoses represent special occurrences of comorbid conditions — conditions that occur in a person at the same time.

There is a high prevalence of comorbidity between substance use disorders and other mental health disorders, all of which are formally listed in the American Psychiatric Association’s (APA) Diagnostic and Statistical Manual of Mental Disorders – Fifth Edition.

Still, the high rate of dual diagnoses associated with nearly every type of mental health disorder does not mean that one disorder caused the other, even if one condition appeared first.

Many intervening factors interact to produce these disorders. It is rare that an actual causal relationship occurs.

What Factors Explain the High Rate of Dual Diagnoses?

According to the APA, three conditions may explain the high rate of dual diagnosis.

Not the Result of Substance Abuse or a Medical Condition

When any type of psychiatric symptom is believed to be caused by a medical condition or is the direct result of drug use, the individual cannot be diagnosed with a psychiatric disorder.

For instance, individuals who become extremely depressed during withdrawal from stimulants would not be diagnosed with depression. Instead, when it is determined that the direct effects of drug use are responsible for the particular psychiatric presentation, the individual is diagnosed with substance- or medication-induced depression.

Likewise, when a medical condition is responsible for the person’s psychiatric symptoms, they are diagnosed with a disorder due to another medical condition. An example of this is depression due to hypothyroidism.

Thus, psychiatric symptoms that are known to be caused by the direct effects of substance use or other medical conditions are diagnosed according to the condition that caused them and not as stand-alone psychiatric disorders.

Nearly every psychiatric or psychological disorder in the DSM-5 is associated with an increased risk for the development of a substance use disorder.

The Impact of Dual Diagnosis

Someone dealing with a dual diagnosis may have no idea what drives their drug use. For most, using drugs is the only way to treat their disorder adequately. Individuals with a dual diagnosis often have complex medical and psychiatric needs, but they will be bounced from one service to another. Most of these services, unfortunately, will not understand how to help them.

Dually diagnosed people can have chronic medical or psychiatric conditions because they were not caught in time when they would have been easier to treat. They typically fall between the cracks because agencies are not equipped to provide the right support.

Many are overmedicated because they are better managed this way. Unfortunately, they will be left without support to help manage their lives in the community. If they come into contact with the police, they can end up in jail or psychiatric hospitals.

It is common for those with a dual diagnosis to be denied housing services because of their complicated needs.  Life on the streets leaves them extremely vulnerable, and this is a problem affecting many of the homeless in Los Angeles and San Francisco.

Many are rejected by their families, leaving them exposed and vulnerable to exploitation or violence on the street. It can lead to out-of-control behavior due to feeling like no one cares.

People can have a biological tendency to develop mental health issues such as depression, bipolar disorder, or schizophrenia, but it does not mean that it will happen. It means that certain factors coming together increases the risk of someone developing a problem. The higher the risk, the higher the chance the problem will be more severe.

Events that take place in childhood or adulthood often contribute to the onset of mental health issues. Adverse life events have been tied to the development of mental health problems. Early childhood trauma, such as death or separation of parents, or adult events, such as the death of a family member, can be a precursor to a mental health problem. Minor daily inconveniences may also be relevant for those with developmental disabilities, and conflicts with family members can be an important area of concern for those with a dual diagnosis.

What Are Common Mental Health Problems

The DSM-5 list several different categories of depressive disorders in which chronic sadness or decreased mood is the main feature of the disorder.

Most people who are diagnosed with depression are actually diagnosed with major depressive disorder (MDD). This disorder is different from the usual everyday fluctuations in mood and everyday sadness that individuals experience.

MDD is a diagnosable syndrome that requires specific conditions to be met. These conditions must be present for a minimum of a two-week period.

Depressive disorders are associated with high rates of substance abuse. More than 20 percent of individuals diagnosed with MDD also have a comorbid diagnosis of a substance use disorder.

The most common substance of abuse in people with MDD is alcohol, although other substances are certainly abused. Some estimates suggest that 40 percent or more of individuals diagnosed with MDD have some type of co-occurring substance abuse issue.

Bipolar disorder occurs when an individual displays alternating periods of mania or hypomania and/or depressive symptoms.

Alcohol is the most common substance of abuse in people with eating disorders, but other substances are also abused, such as amphetamine or tobacco to control weight. 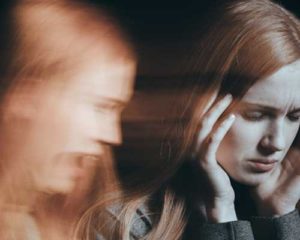 The primary feature of these disorders is the presence of obsessions (intrusive, repetitive, and unrealistic thoughts or beliefs) and compulsions (repetitive behaviors designed to reduce the anxiety associated with the obsession).

Research has suggested that 20 to 30 percent of individuals who are diagnosed with OCD have a co-occurring substance abuse issue.

There is also evidence to suggest that the particular type of substance abuse that is comorbid with OCD is different for men than it is for women. Men diagnosed with OCD are more likely to have alcohol use disorder, whereas women with OCD may be more likely to abuse prescription medications.

There are high rates of alcohol use disorders and prescription medication abuse overall individuals with OCD.

Personality disorders are very chronic, rigid, and dysfunctional approaches to dealing with others and the challenges of life in general.

These disorders typically begin to appear in late childhood or early adolescence. They are often very resistant to change even if they are extremely dysfunctional.

Research studies have suggested that the type of personality disorder may influence comorbidity for a particular type of substance abuse.

For instance, alcohol is the most common substance of abuse with personality disorders.

Estimates suggest that 22 to 78 percent of individuals with personality disorders may have a co-occurring alcohol use disorder.

Other types of substance use disorders are also common in individuals diagnosed with personality disorders, including stimulant use disorders, prescription medication abuse, and others.

Psychological disorders that are associated with the experience of significant trauma or stress were once classified as anxiety disorders. Now, they are classified in a separate category as trauma- and stressor-related disorders.

The most widely known of these disorders is PTSD or post-traumatic stress disorder. It is generally estimated that about 20 percent of people in treatment for PTSD have a co-occurring substance use disorder. As with most forms of psychological disorders, the relationship between substance abuse and PTSD is not well-defined.

The disorder must first appear in childhood even if it is diagnosed in an adult.

ADHD is commonly treated with medication, although contrary to popular belief, individuals with ADHD are not likely to abuse their prescribed medications.

Instead, individuals who are not treated for their ADHD are far more likely to develop issues with substance abuse than those who are formally treated.

The most common co-occurring substance use disorder in individuals with ADHD is alcohol use disorder. Other substances are commonly abused, such as tobacco and cannabis.

Schizophrenia is a severe psychiatric disorder in which an individual loses contact with reality. These individuals often have hallucinations, which are most often auditory. They also suffer from delusions or very fixed, rigid, and unusual beliefs. They frequently have problems expressing emotions or feeling pleasure.

It may be that the nicotine in cigarettes has a medicinal effect on the distress associated with schizophrenia.

Other common substances of abuse include alcohol, prescription medications, and illicit drugs like heroin or cocaine.

As mentioned above, nearly every psychological or psychiatric disorder listed in the DSM-5 is associated with an increased risk of developing a substance abuse issue.

Treatment for dually diagnosed individuals should be comprehensive. It should address all of the individual’s psychological or psychiatric conditions at the same time. Trying to treat the substance abuse issue without addressing the other co-occurring issue is never an effective approach.

Typically, this is described as an integrated treatment approach. This approach utilizes a team of specialists from different fields who work together to address all the individual’s issues simultaneously.

The team is typically led by a psychiatrist or other physician. The members of the team meet periodically to discuss treatment progress and further develop the overall treatment plan.

Treatment for dual diagnoses will typically combine therapy with medication and other treatment interventions that are deemed necessary for the individual’s recovery.

The types of behavioral interventions that are typically useful in the treatment of dual diagnoses include:

(CBT) that address dysfunctional belief systems and behaviors. Many different types of CBT are used in the treatment of dual diagnoses, such as dialectical behavior therapy, systematic desensitization, rational emotive therapy, and others.

These are often useful for individuals with severe dysfunction, such as schizophrenia. These programs provide rewards or vouchers when the individual practices healthy behaviors.

This provides outreach services to individuals in the community.

Medications are often used in the treatment of dual diagnoses. The medications can be used to treat the specific disorder in question and to address issues with substance abuse, such as withdrawal symptoms or cravings.

Research indicates that the combination of medications and behavioral treatments like therapy and group support is more effective than using either treatment alone.

The approach to treating individuals with dual diagnoses is long-term. In cases like schizophrenia that co-occur with substance abuse, it may be indefinite.

Long-term participation in therapy and peer support groups is often needed to maintain abstinence from drugs or alcohol and to continue to address the issues particular to the psychological diagnosis.