Oxazepam is a sedative-hypnotic drug that’s used to treat anxiety disorders. It’s in a class of drugs called benzodiazepines that have been used since the 1960s to treat anxiety, insomnia, and muscle spasms. While the drug is useful for many people that deal with anxiety issues, they’re also known to cause chemical dependence when they’re used for too long or in high doses. Dependence can lead to uncomfortable withdrawal symptoms if you try to cut back or quit. But does oxazepam cause potentially dangerous withdrawal symptoms? How can you get through benzodiazepine withdrawal safely? Learn more about oxazepam withdrawal and how it can be treated.

Will You Experience Oxazepam Withdrawal Symptoms?

The likelihood that you might experience withdrawal from oxazepam will depend on how long you take the drug, the dose you’re used to, and how quickly you stop taking it. Benzodiazepines are known to cause what’s called chemical dependence after just a few weeks of regular use. Dependence is a reliance on a drug that’s caused by your brain’s adaptation to its regular use.

Drugs like oxazepam can change your brain chemistry in order to achieve their intended effects. However, after a few weeks, your brain will adapt to these changes and adjust its chemistry in an attempt to achieve chemical balance. When you stop taking the drug after developing chemical dependence, you may experience uncomfortable or dangerous withdrawal symptoms.

Oxazepam is described as the short-term therapeutic treatment of anxiety disorders. It’s typically only prescribed for two to four weeks. If you use it for longer than that, you risk chemical dependence. You may also develop a dependence on the drug when you use it recreationally, in high doses, or mix it with other drugs. One of the first signs of dependence is tolerance. Tolerance may make you feel like the drug’s effects are getting weaker over time. In reality, the drug’s potency isn’t changing; your brain is getting used to the substance and adapting to its presence. Increasing your dose may cause your tolerance to grow and deepen your dependence on the drug.

Dependence can lead to addiction, which is characterized by continued, compulsive use of the drug despite consequences. Together, addiction and uncomfortable withdrawal symptoms can make it difficult to stop using a drug.

Other signs of a chemical dependence include:

What Are the Oxazepam Withdrawal Symptoms?

The oxazepam withdrawal symptoms you experience may vary in intensity based on the severity of your dependence on the drug. They can also be worse if you quit cold turkey. Oxazepam causes withdrawal symptoms that are similar to the withdrawal symptoms of other benzodiazepines. As depressants, benzos slow down activity in your central nervous system, leading to feelings of relaxation, sleepiness, and calmness.

When you become chemically dependent, your brain will adapt to rely on the drug to facilitate these feelings. When you stop taking the drug, your brain chemistry will be thrown out of balance, causing withdrawal symptoms. In most cases, withdrawal symptoms are characterized by an increase in nervous system activity now that the drug’s depressant effects are suddenly removed. This can cause something called rebounding.

Rebounding is the return of symptoms that a drug is designed to help treat. Oxazepam is used to treat anxiety and sleep problems. When you stop taking it, common withdrawal symptoms include anxiety, panic, and insomnia, as well as the below:

When Will Symptoms Show Up?

Oxazepam is a relatively short-acting benzodiazepine, and typical doses are taken as much as three times each day for therapeutic use. That means that its effects may wear off after six to eight hours. It also has a short half-life, which is the time it takes your body to process the drug and reduce its concentration in your blood to half of its original concentration. Oxazepam’s half-life is between six and 25 hours. You may stop feeling the effects of the drug within a few hours, and uncomfortable withdrawal symptoms could show up within the first day after your last dose.

Your withdrawal symptoms may start gradually and get worse over time. When they reach their peak, you may feel the most intense symptoms of your withdrawal period. Serious problems like tremors, seizures, and delirium may be more likely during peak symptoms, especially if you quit abruptly. Your symptoms are likely to peak within the first few days after your last dose. After that, acute symptoms will fade. After that, you may enter the post-acute withdrawal phase that’s often associated with depressants. During this phase, seizures can still occur, and you may feel symptoms of restlessness, insomnia, and anxiety. In some cases, these symptoms need to be addressed in treatment.

Like other central nervous system depressants, there is some danger associated with withdrawal. Oxazepam can cause potentially dangerous and life-threatening withdrawal symptoms that are associated with an overactive nervous system. Seizures can occur that are similar to the ones someone with epilepsy might experience. These tonic-clonic seizures are characterized by a loss of consciousness, muscle rigidity, and convulsions. Passing out and erratic body movements can lead to injuries, especially if you’re alone when they occur.

Depressants can also cause delirium tremens, a condition that comes with the sudden onset of extreme confusion, panic, sweating, shaking, tremors, and heart palpitations. In treatment, delirium tremens can be avoided or effectively treated. However, if you go through it without medical help, it can lead to fatal heart failure or strokes. Delirium tremens isn’t as likely to happen during benzodiazepine withdrawal as it is if you withdraw from alcohol, though it is possible.

How is Oxazepam Withdrawal Treated?

There are several treatment options to help you get through oxazepam withdrawal safely. If you only have a mild case of chemical dependency, you may be able to taper off the drug with the help of your doctor. As soon as you notice signs of dependence or drug tolerance, let your doctor know. They may be able to adjust your dose, switch your medication, or taper off the drug slowly. Tapering allows your body to readjust to life without the medication slowly, without causing severe or uncomfortable withdrawal symptoms. 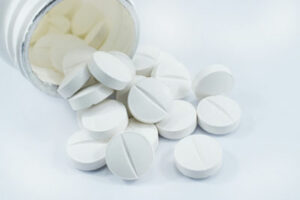 If you have a more severe case of oxazepam withdrawal, you may need to go through a detox or residential treatment program. A severe case may occur after taking high doses for a long period of time or taking the drug for many weeks or months on a regular basis. In such cases, quitting, especially cold turkey, can cause you to experience severe and life-threatening withdrawal symptoms. Medical detox can help you get through withdrawal safely and as comfortably as possible.

Detox is also an important part of treatment for people that have moderate to severe substance use disorders and addiction. If you’ve become addicted to oxazepam or other depressants, it may be difficult to quit on your own, especially when cravings are combined with uncomfortable withdrawal symptoms.

Detox involves 24-hour care from medical professionals. It’s the highest level of care in formal addiction treatment, and you may be treated with prescription medications, therapy, and other treatment options according to your needs. You might also be treated with medications to alleviate symptoms or to help you taper off the drug slowly.

What Happens After Detox?

After you go through detox or a tapering period, you may need additional levels of care. If you’ve become addicted to oxazepam or other drugs, detox may not be enough to lead to lasting recovery. Addiction is characterized by powerful compulsions to use the drug again. You may encounter these cravings even after your brain chemistry recovers from oxazepam dependence.

Addiction treatment involves multidisciplinary approaches and several levels of care. If you have high levels of medical or psychological care, you may continue in an inpatient treatment program. As you progress, you may move on to outpatient treatment when you’re able to live on your own without jeopardizing your sobriety or safety. In each level of care, you will receive personalized care that addresses biological, psychological, and social needs.

You may go through a variety of therapy options, including pharmacotherapies and psychotherapies. Cognitive-behavioral therapy is popular and helpful for a range of needs in addiction treatment. But you may also go through therapy that can address specific needs like eating disorders or past traumas.