What is a Functional Alcoholic?

Let’s paint the scene: It’s 6:30 in the morning on Thursday, and your alarm clock is ringing. It’s time for work. Your head is throbbing, you’re nauseous, everything hurts, and if you don’t get up soon, you’ll be late to work. You turn over, and there’s a bottle of alcohol on the nightstand; you take a swig, get in the shower, and you’re off to work. A companywide email comes in that morning saying you’re the employee of the month, again, for the third consecutive month. Despite how much you’re drinking and going out every night, life is going well. So, what reason would you have to change? Not much, right? Well, If this sounds like you, all the signs point toward you being a functioning alcoholic.

Life is going well; alcohol is legal, so what’s the issue? Well, there are a lot of problems with it, and according to the statistics, you’ll soon become a statistic if you don’t change your ways. In the beginning, alcohol consumption may not seem like a big deal, especially if it’s not interfering with your personal or work life. How can something so dangerous be legal, advertised everywhere, and easily and legally accessible to anyone over the age of 21? It’s hard for anyone to comprehend, especially recovering alcoholics, but the substance has its grip on many people, even those we’d never suspect.

According to the National Institute on Alcohol Abuse and Alcoholism (NIAAA), an estimated 85.6 percent of people aged 18 and older reported drinking alcohol at some point in their life. For most of those people, their drinking stopped after that night. However, for others, they continued drinking. Alcoholics never intended to become addicted to the substance and likely weren’t aware as they were becoming dependent on it. A night out on the town used to be one cocktail, and you’d be buzzed, but continuous drinking led to a tolerance, which then meant you needed two or three to feel that way. Now, you might have reached a point where you wake up and need a drink to get out of bed.

Unfortunately, it’s no accident that functioning alcoholics hide their secrets so well. They know exactly what they’re doing, so how do you determine if someone you know or love is a functional alcoholic? Below, we’ll discuss how to recognize those signs.

What Is a Functional Alcoholic?

A functional alcoholic isn’t some elaborate medical term. It’s merely a person dependent upon alcohol but is present in their engagements and functions in society. For most addicts, it’s easy to pinpoint that they are using substances. They’re sloppy, miss work, and neglect their appearance. However, functional alcoholics seldom miss work or other obligations. They manage all areas of their lives, including at home, work, and their families. Many of them are outwardly successful, and you’d never guess there was an issue, but that’s what they want.

A functional alcoholic’s outward appearance is one of being physically and mentally healthy. However, don’t let appearances fool you, as they’re likely struggling with overwhelming cravings, unsuccessful attempts to quit drinking, and obsessive thoughts about the next time they’ll drink, which are hallmarks of an alcohol use disorder (AUD).

According to the National Institute of Health (NIH), functional alcoholics are most often middle-aged, well-educated men and women with stable jobs and families. What caused them to become functional alcoholics is not known. However, the risk factors that increase the odds of developing alcohol problems include:

What Are the Signs of a Functional Alcoholic? 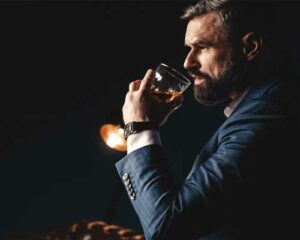 It’s not as easy to pinpoint whether or not someone you know is a functional alcoholic. If a person is succeeding at work, looks happy with their family, and has no outward signs of distress, how can you tell if someone is addicted to alcohol? It’s possible that the person with the problem doesn’t even know it.

Here are signs to look out for:

For most of us, drinking would cause our lives to implode, leading us to seek help for our actions. However, functional alcoholics don’t have the same negative consequences for their actions. The denial runs deep for them because they don’t suffer financially and go to work every day. They tell themselves that because they can pay their own bills, there isn’t a problem.

Unfortunately, functional or not, they have the same problems as other addicts – they might try to quit on their own but withdrawal is too unpleasant, so they give up. They continue to drink, and the cycle continues. Eventually, their lives will unravel, whether it’s a DUI (driving under the influence) charge, losing their job, or having a medical emergency resulting from their drinking, such as withdrawal-induced seizures or alcohol poisoning. Everything catches up.

When a functional alcoholic lives in denial, how do you help them?

How Do You Help a High-Functioning Alcoholic?

It’s challenging to see the signs of a person ruining their lives and for them to ignore them completely. Watching someone struggle with alcohol abuse can affect your life as bad as it’s affecting theirs. If you’re related to the person or married to them, you want to see them succeed. Fortunately, many resources exist to help them recover. They’re never alone in this situation, even if they feel like it. These resources can be as close as their primary care physician’s office, a treatment facility, or peer support groups. All of these options are effective in reducing or stopping someone’s unhealthy drinking patterns.

One thing to bear in mind is that alcohol addiction is serious. Many of us overlook that fact because it’s on the shelves of our local supermarket, but its withdrawals are more dangerous than most illicit drugs. If you consume large amounts of alcohol for a prolonged period, you will experience both mental and physical problems upon stopping use. These symptoms can range from mild to severe. If the high-functional alcoholic you know is ready to stop drinking, they must go about it the right way by seeking professional addiction treatment.

Various settings can treat alcohol addiction. Inpatient or residential treatment provides the individual with an environment where they can stay on-site for frequent monitoring and care. The first phase will consist of medical detox, which is an intensive part of the process that oversees their care while alcohol leaves their system. Doctors will provide medication and supervision to ensure their safety.

Once they’re deemed medically clear, they can choose to live on-site for a period of up to 90 days while they learn more about their addiction and what caused them to drink. For others who may use their job or family as a barrier to getting help, outpatient treatment is available and just as effective.

If you’ve been living a double life and are tired of pretending to be someone you’re not, help is available. Stop suffering another day.