If you’ve been diagnosed with an anxiety or seizure disorder or insomnia, you might have discussed with your doctor medication you could use to ease your symptoms when they’re at their worst. While benzodiazepines would likely be the solution today, the drugs that preceded them were known as barbiturates. These drugs were extremely addictive and potent central nervous system (CNS) depressants that changed the trajectory of medicine. Between the 1920s and mid-1950s, barbiturates were the only medications used as sedatives and hypnotics. Adolf von Baeyer first synthesized these in 1864. It wasn’t until 1879 that the French chemist, Edouard Grimaux, perfected barbiturates and changed medicine forever.

Anxiety is widely considered the most common mental illness in the United States, affecting an estimated 40 million people each year. Although these figures were much lower back then, medication was still needed to manage these conditions. When barbiturates came into the picture, it was revolutionary, and the concerns people had about their inability to sleep, remain calm, or prevent epileptic seizures were all put to rest. While the medication worked early on, scientists could not predict how addictive these drugs were and their effects on people. Because of their addictive nature, scientists sought new drugs to replace barbiturates.

One such barbiturate, Amytal, is an extremely addictive and potent medication used to treat anxiety and insomnia. At one point in its long history, it was used to treat American soldiers during their fight in World War II to treat a condition known as “shell shock.” However, like the rest of the population, officials witnessed the significant impairment and addiction problems it was causing in the soldiers, leading to the end of the project, which was a common theme across the United States with these drugs.

Today, most barbiturates have been removed from doctors’ prescription pads because of the inherent dangers associated with the use of the medication. The most apparent issues attributed to barbiturates include abuse, addiction, and the relatively small amount it takes for someone to overdose. The government took this problem so seriously that they removed most of them from use. The U.S. Drug Enforcement Administration (DEA) says only 12 barbiturate medications are used today for medical purposes in the United States. One such drug is Amytal.

Since Amytal is so addictive, it has been restricted solely for use in a hospital setting. It’s sometimes used as a sedative before surgery, and the medication can only be obtained illegally for illicit use on the dark web. Amytal is an exceptionally potent drug that should only be given and used under the supervision of medical professionals who can provide medical care in case an overdose occurs. Without proper care, an Amytal overdose is likely, which can lead to organ damage or death.

Below, we discuss how Amytal affects your body and what to do if you become addicted to this potent drug. 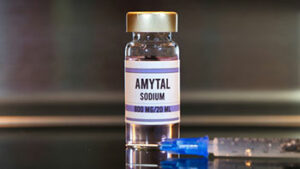 relaxation. GABA is a natural means of relaxing and falling asleep to ease activity in the central nervous system. The chemical helps us relax our muscles, calm nerves, relieve stress, and alleviate anxiety by slowing down nerve impulses that cannot reach the brain. Those with a chemical imbalance of GABA will experience sleeplessness, anxiety, and sometimes seizures, meaning they need medication to balance it out.

Amytal mimics GABA and binds to the receptors in your brain responsible for relaxation. When the drug enters your system, stimulation causes an overproduction of GABA, effectively flooding the nervous system and causing intense feelings of sedation to help you fall asleep, calm down, or manage seizures. Despite its effectiveness, the effects responsible for relaxation also can cause the user to feel intoxicated, similar to alcohol, and produce euphoria, which people admit they become addicted to the feeling. The result? They’ll pursue more of the drug to replicate their experience, eventually leading to an addiction.

What Are the Signs of Amytal Addiction?

In some cases, identifying an addiction to Amytal will be more challenging than it sounds. In the earliest stages of an Amytal addiction, the individual will not exhibit signs that you’re trained to look for. However, there are signs of barbiturate addiction you should know. As an extremely potent drug, there are plenty of outward signs to be aware of to anyone paying attention. Over a brief period, isolated signs of abuse will become more apparent as the individual falls deeper into the throes of addiction. Toward the end, you won’t be able to ignore these signs any longer because they’ll likely start stealing or doing whatever it takes to support their habit.

Despite Amytal and its restriction for hospital use only, the primary issue physicians run into with prescription drugs is when the lines are blurred, and someone cannot distinguish the line between therapeutic use and addiction. However, when it comes to barbiturates like Amytal, it’s much easier to determine when someone is addicted to the drug because they must go out of their way to obtain the drug off the dark web or black market. Anytime you buy and use drugs without a prescription, it’s considered abuse, even if you’re still following the dosage set forth by a doctor. However, the risk of picking up counterfeit drugs skyrocket when the substance is not from a licensed pharmacy or medical professional.

The most common signs of Amytal addiction include:

When you reach the stage of full-blown addiction, the person will exhibit the following symptoms:

At this point, addiction treatment is crucial, especially to avoid dangerous withdrawal symptoms.

What Is Involved in Amytal Addiction Treatment?

One reason Amytal was removed from use is the dangerous withdrawal symptoms you’ll face upon stopping your use of the drug. Barbiturates are among the most dangerous drugs to detox from, meaning you must seek professional addiction treatment to stop.

The first and most crucial step in the continuum of care is medical detox, where you’ll spend three to seven days allowing the drug to exit your system. Medical professionals will provide medication to ease your symptoms and ensure you don’t encounter seizures. However, this can still occur, even with medical care, but having trained staff around you ensures your safety in the event of the unknown.

Once you’re deemed medically stable, you’ll move into the next level of care, which could be an inpatient treatment facility or outpatient care. The severity of your addiction will determine the course of care set forth by the clinicians. Those with a history of relapse and an unsafe home environment are more likely to be placed in residential care. In contrast, someone who took the medication as prescribed and has a safe, supportive home environment will be placed in outpatient care.

How Dangerous Is Amytal Overdose?

Although an overdose on any drug is dangerous, barbiturates have unique risk factors because of their sheer strength. When you take a specific dosage of a drug, it’s uncommon that 1 mg or 2 mg or more will cause a fatal overdose. However, in the case of barbiturates like Amytal, 1 mg or 2 mg can be the difference between life or death. For that reason, an Amytal overdose is especially dangerous, especially for how it can affect you. If you suspect someone has overdosed on Amytal, don’t wait—call 911 immediately. A few seconds can be the difference between life and death, so please, don’t wait.