With the current state of the world, hearing about anxiety disorders has become all too common for those around us. Unfortunately, our first thought to treat how we feel is to pick up a pill for temporary relief. With that said, many of us will turn to doctors who will prescribe a benzo medication. For most, it’s something that, in their worst moments, they’ll reach for, find relief, and not need it again until the next big anxiety attack. However, others may fall in love with how it makes them feel and continue using the drug, even if they’re not experiencing anxiety.

The need for benzodiazepine treatment in Pennsylvania and nationwide shouldn’t come as too much of a shock. With an estimated 18.1 percent of people suffering from anxiety disorders throughout the United States, a significant amount of people are prescribed benzodiazepines to combat their symptoms. Yale Medicine has gone as far as saying that benzodiazepines could be the next opioids and cause a significant crisis, similar to what we’re facing with heroin and fentanyl.

Despite their addictive qualities, benzodiazepines are therapeutic medications that can make a difference in a person’s life. They’re approved to treat insomnia, seizures, social phobia, generalized anxiety disorder, and panic disorder. They’re routinely used as premedications before some medical procedures. However, the dose, frequency, and duration of treatment depend on the severity of symptoms a person faces at the time. Only a doctor can make this determination on how much you’ll need to take.

Even though these drugs serve a vital purpose for more than anxiety, they’re misused and abused, causing severe issues like chemical dependency and addiction. When a person becomes addicted to benzos, they’ll act out of character, causing them to steal or commit crimes despite the repercussions. In other cases, benzos will be taken in conjunction with other drugs like alcohol or opioids, which can be fatal.

If you’ve become dependent on or addicted to benzodiazepines and need treatment in Pennsylvania, Summit Behavioral Health can help you. Before getting help, you need to know what to expect. We understand that one of the many barriers to getting help is not knowing how it works, so we hope to solve at least one thing that’s holding you back from getting help. Benzos are among the most dangerous drugs to detox from, meaning that help is the difference between life and death.

The Problem With Benzodiazepine Prescriptions in Pennsylvania

The United States has been significantly affected by the overdose crisis. While opioids have led the way, other drugs like benzodiazepines have also caused some problems. States like Pennsylvania aren’t exempt. In 2018, Pennsylvania coroners and medical examiners reported a staggering 4,491 drug-related overdose deaths. These were ruled either accidental or undetermined. The figures represent a rate of 35 deaths per 100,000 people. Between 2015 and 2018, there was a 36 percent increase in drug-related overdose deaths in the state. 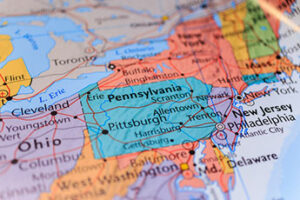 Although the number of benzodiazepine overdose deaths was not disclosed, these highly potent drugs can lead to addiction after a few weeks of use. Despite their therapeutic potential of relieving insomnia or anxiety, they can eventually make these symptoms worse when abused and cause tolerance, chemical dependency, and addiction.

When our bodies rely on benzo to stimulate neurotransmitters, it takes more for you to achieve the desired effects, known as tolerance. When our bodies endure withdrawal symptoms because you cut down the dose or stop using it altogether, this is referred to as dependence. The primary issue with benzodiazepines is that you must slowly wean off the drug if you’ve become dependent or addicted because of the severe withdrawal symptoms. For that reason, getting help is vital.

If you’ve become dependent on benzos, pay attention to the following signs:

The need for benzodiazepine treatment in Pennsylvania is greater than ever. If you’re considering getting help, it’s important to learn what you can expect.

Fortunately, benzodiazepine treatment is easily attainable in Pennsylvania. If you’re battling a substance use disorder (SUD) with benzos, here is how we can help.

Detox is vital for someone going through benzodiazepine withdrawal. Due to the inherent dangers involved, you must go through this stage of care. Medical detox is a 24-hour process that lasts anywhere from three to seven days. However, it could be longer depending on the severity of your condition. The objective is to lessen symptoms in a safe environment before being moved into the next level of care.

Once you’re deemed stable by the clinicians in the medical detox facility, you’ll be moved to the next level of care. For some, a stint in inpatient care will be necessary as they overcome their benzo addiction. It’s similar in intensity to medical detox, will last anywhere from 30 to 90 days, and is necessary for those with pressing medical conditions.

Partial hospitalization must be available at least five days a week, and it typically occurs during the day. PHP must offer alternative hours, such as half-days, evenings, or weekends. It can either be freestanding, separate from a traditional hospital, or be part of a broader system a facility offers. It’s ideal for those coming from a more intensive level of care like inpatient treatment.

Outpatient care is an ideal choice for a person who used their benzo prescription as intended but became addicted despite their precautions. Outpatient is also great for those who might fear losing their job or falling behind in school as a barrier to getting help. You’ll be able to attend therapy and come home in the evening.

Once you complete addiction treatment, the journey has only begun. Facilities like Summit Behavioral Health believe in providing you care even once you leave the treatment center. Fortunately, they’ll connect you to others in the alumni program, help you find 12-step programs, and do whatever it takes to keep you sober.

We understand you might have additional questions about treatment at our facility. Here is a list of frequently asked questions:

How Long is Rehab?

The length of treatment will vary based on several factors. For example, a person who used benzodiazepines as prescribed by their doctor won’t be in treatment as long as someone who abused them for years. For this reason, it’s challenging to put a number on it, but it can last anywhere from 30 to 90 days. Each case is unique and will be treated as such.

Summit Behavioral Health will provide transportation to off-site appointments if need be and to and from major airports. Our staff will also assist you with connecting flights, taxis, ride-hailing services, or other means of transportation. We know this can be a barrier to getting help, so we’ll do whatever it takes to help get you into treatment.

How Much Does Benzodiazepine Treatment Cost?

Similar to the length of stay, this is something that will vary from one case to another. If you only need outpatient treatment, it’ll be much less than inpatient because you won’t be living on-site. If you’re trying to overcome a substance use disorder, you’ll need to be in treatment longer and require detox. For that reason, we can’t give you a definitive figure. However, treatment can range from a few hundred dollars to a few thousand.

Our facility accepts most major insurance providers. However, you should always contact your insurance company or the knowledgeable staff at Summit to determine if you’re covered and what’s covered. Below are some in-network providers for Summit Behavioral Health: