Anxiety disorders are considered the most common mental illness, meaning millions of people seek relief to manage these conditions. While many will opt for a more natural means of treating their anxiety, others may require chemical relief when all other options fail.

One medication used for anxiety, known as Librium (chlordiazepoxide), is a benzodiazepine that reduces activity in the central nervous system. It also blocks nerve impulses, which makes it easier for our bodies to relax and control stress, anxiety, and fear. In addition to anxiety relief, Librium can also be used by those in detox for alcohol withdrawal, as well as a muscle relaxant.

Benzodiazepines like Librium are among the most prescribed medications in the United States, meaning the likelihood of them being misused, abused, and leading to addiction is much higher, according to the U.S. Food and Drug Administration (FDA).

The federal agency estimates that outpatient pharmacies in the United States dispensed around 92 million benzodiazepine prescriptions in 2019. In 2020, they announced they’d be updating their box warning labels to alert medical professionals and patients about the potential risks of the medication(s).

Although Librium can be an effective and therapeutic medication when used in moderation and taken as prescribed, it can also cause side effects in low dosages. These effects include the following:

Those who misuse Librium and use it recreationally are putting themselves in extreme danger, which can lead to life-threatening symptoms. Individuals who use the medication for recreational purposes might experience severe side effects if they take higher doses of Librium than prescribed.

Severe side effects that may occur as a result of Librium misuse include the following:

While abusing any benzodiazepine can be dangerous, Librium is a long-acting benzo, meaning it can be especially dangerous. A long-acting drug is one that has a longer half-life, which means it takes much longer for it to exit our system. A drug’s half-life refers to how long it takes for the medication to be broken down in the body. Librium may take anywhere from ten to 30 hours to exit our system. This is why it may take several hours for a person to experience the effects, and it also means that withdrawal symptoms won’t appear for quite a while after a person stops using it.

According to the FDA, a person prescribed benzo drugs like Librium can develop a physical dependence when using the medication regularly over several days or weeks. This can occur even when a person follows their doctor’s medical advice. The FDA also advises that a person who uses Librium for months or weeks should take precautions when missing a dose or stopping the medication suddenly as they might experience mild-to-moderate withdrawal symptoms. 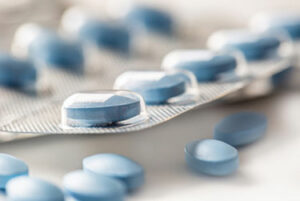 You should always speak to a doctor before making a decision of this magnitude, but abrupt cessation is never recommended after long-term use of Librium or any benzodiazepine drug. A sudden break in use can put the body into shock, and the patient can encounter debilitating, and in some cases, life-threatening symptoms as a result.

Although doctors will typically advise against using benzos for a prolonged period, some people with severe anxiety may need it to function normally in their lives. If that’s the case and you’re considering stopping, it’s natural to wonder what kind of symptoms you’re going to experience.

The first portion of Librium withdrawal will be a challenge and extremely uncomfortable. During withdrawal, it’s common to experience the following:

If you’ve opted to stop using Librium and you’re currently facing withdrawal symptoms, you might be wondering how long this discomfort will last. Unfortunately, it’s hard to provide a definitive answer of how long Librium withdrawal will last because several factors determine the length. We’re all different, and our sex, age, weight, how long we’ve used Librium will influence the length and severity of our symptoms.

Other factors that affect how long withdrawal lasts include:

The factors mentioned above help shape the severity and timeline of Librium withdrawal.

Getting Detox For Librium Withdrawal

Due to the unpredictability and pain of benzo withdrawal, a person anticipating stopping Librium must seek professional help. Not only is the process challenging to overcome alone, but it can also be life-threatening. For this reason, surrounding yourself with a team of dedicated medical professionals tasked with ensuring your comfort and safety is the best decision you can make. If you’re ready to take this seriously, you should never risk your life in the process of getting sober.

Why Should I Go To A Facility For Librium Withdrawal?

A licensed facility that knows how to deal with the uncertainty of withdrawal symptoms will not only help you in the short term but will prepare you for what to expect in the long term. Medical professionals will be available around the clock for anything you’ll need and set a tapering schedule to ensure Librium exits your system safely. By doing this, it provides your body with time to adjust to Librium, leaving your body.

Medical detox does more than just ensure you receive observation for your physical symptoms, but it’ll make sure that your psychological symptoms are taken care of as well. A psychologist will work with you to understand why you began abusing the mediation and determine if you have a co-occurring mental health disorder. By doing this, they can start treating you with the proper medication so that you don’t relapse in the future. You must always be honest about your symptoms because if you don’t treat the issues, you’ll likely start abusing the drug again in the future. The National Institute on Drug Abuse (NIDA) recommends that a person in recovery must remain there for at least 90 days for a favorable outcome.