Abuse of prescription opioids often leads to the use of stronger, illicit drugs. However, addiction is treatable, and learning the signs of addiction can help you avoid some of the most dangerous consequences of the disease. Learn more about codeine addiction.

Codeine is a naturally occurring psychoactive alkaloid found in the opium poppy plant. As an opiate, it works similarly to other drugs obtained from opium, such as morphine and heroin. However, its effects are milder than many of its counterparts. Codeine is commonly used as a medical treatment for mild-to-moderate pain symptoms.

It’s also commonly used to relieve the discomfort from coughing, so it is used in some cough medicines and suppressants. However, there is little evidence to support its effectiveness as an acute cough suppressant. Nevertheless, codeine can also be used to treat irritable bowel syndrome and diarrhea.

Codeine comes with several side effects, most commonly, drowsiness and constipation. It can also cause stomach pain, headache, and difficulty urinating. According to MedlinePlus.gov, it can also cause:

Like other opioids, respiratory depression is one of the most dangerous side effects codeine can cause. It can occur during an overdose, and it’s more likely to happen when codeine is used with alcohol, other opioids, or prescription sleep aids like benzodiazepines.

When used with alcohol, for example, this combination may increase side effects like drowsiness, dizziness, difficulty concentrating, lightheadedness, and cognitive impairment. Such use can even lead to death. Mixing alcohol and codeine can cause severe effects such as low blood pressure, respiratory distress, fainting, coma, or even death may occur, states Drugs.com. 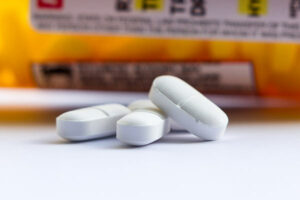 Like other opioids, long-term use or abuse can lead to tolerance, physical dependence, addiction, and withdrawal symptoms. Withdrawal often mimics a cold or flu with a runny nose, nausea, vomiting, sweating, diarrhea, body aches, and chills.

Codeine works in the body in a way similar to other opioids but with a few key differences. It primarily works by activating specific opioid receptors, but it has a low affinity for the receptor on its own.

What are the Signs of Codeine Addiction?

Codeine addiction, like other prescription opioids, can lead to serious consequences, including the use of illicit drugs, legal issues, infectious diseases, and more.

According to the U.S. Centers for Disease Control and Prevention, three out of four heroin users reported using prescription opioids first. However, addiction is a severe substance use disorder, and it usually follows some clear signs.

The Mayo Clinic states that the signs of growing drug addiction can include:

Catching a problem early can help you to avoid some of the most serious consequences of addiction. It’s also important to note that even serious addictions can be treated.

The first sign of substance use is tolerance. If you have been taking codeine for a while and start to feel like your normal dose is weaker than it used to be, your body could be getting used to the drug. As your body adapts to codeine, it may start to rely on it, which leads to chemical dependency. Dependence is characterized by feelings of withdrawal symptoms or cravings when you miss a dose or stop using. Codeine withdrawal often feels like the flu.

A substance use disorder becomes an addiction when compulsive use gets out of control. Someone who is addicted to codeine will continue to use the drug, even if it causes serious consequences like a job loss or legal trouble.

Consistent with opioid withdrawal in general, the symptoms from codeine occur in two phases, an early and late phase.

According to Healthline, early symptoms include:

The late withdrawal symptoms that can occur are:

Healthline notes that many of the withdrawal symptoms associated with codeine are a reversal of the drug’s side effects. Codeine can cause sleepiness as a side effect, but withdrawal can lead to trouble sleeping or insomnia, as an example.

What’s more, physical withdrawal symptoms can last for a week. However, psychological symptoms like cravings can linger for months. Most symptoms are gone within two weeks.

What is Involved in Codeine Addiction Treatment?

Though opioid addiction is a serious disease that is notoriously difficult to get over, it can be treated with the right help from certified addiction professionals. For treatment to be effective, it needs to be tailored to your individual needs. Because addiction affects everyone differently, it’s important for treatment to be as individualized as possible.

Addiction can come with a variety of underlying causes and consequences that need to be addressed in treatment. Otherwise, things like untreated mental disorders, financial struggles, medical problems, and other issues, can lead to a relapse.

When you first enter addiction treatment, you will go through an intake and assessment process to determine the right level of care for your needs and what needs should be addressed first. As soon as you can, you may sit down with a therapist to go through what is called a biopsychosocial assessment, which looks at your biological, psychological, and social needs.

In many cases, people begin the treatment process with medical detox to address any health-related needs, such as those involving disease and withdrawal. Codeine withdrawal isn’t known to be life-threatening, but it can be extremely unpleasant. People who are addicted to opioids often see withdrawal as a significant barrier to treatment, because, even though it most likely won’t be dangerous, it’s difficult to make it through intense cravings and terrible flu-symptoms without using. In some cases, vomiting, diarrhea, and excessive sweating can cause dehydration, which can be life-threatening.

Medical detox involves 24-hour care daily from medical professionals. You will be monitored at all times to avoid dangerous medical complications, and you may be treated with medications to alleviate your symptoms when necessary.

In some cases, medication-assisted treatment can be used to stave off withdrawal symptoms and cravings. Medicines like Suboxone are used to alleviate withdrawal while you go through treatment. After you are removed from the active addiction lifestyle, address underlying issues, and learn relapse prevention strategies, you are slowly weaned off the medication.

After detox, you will go through levels of care that are appropriate for your needs. If you need continued monitoring for a medical or psychological condition or complication, you may go through an inpatient treatment program or residential treatment that involves 24-hour medical monitoring or clinical care.

If you can live on your own, you may attend an intensive outpatient treatment program, which involves more than nine hours of clinical services a week. This level of care also includes partial hospitalization, which can provide as much as 12 hours of services every day. Outpatient treatment is the last stop on the formal continuum of care. It involves less than nine hours of clinical services every week.

However, it’s a vital part of the treatment process. It provides continued support as you start to enter an independent life with more free time to pursue your goals.