Darvocet is the brand name of a drug that is a combination of the over-the-counter pain-relief medication acetaminophen and the synthetic opioid propoxyphene. Darvocet was initially prescribed to treat mild-to-moderate pain symptoms and was also used in medication-assisted treatment (MAT) to help wean people off opioids such as heroin.

However, Darvocet was criticized by doctors almost immediately after being released onto the drug market. As an extremely weak opioid, the pain-relief effects were described as close to placebo, and the side effects include suicidal behavior and often deadly heart problems.

Because of this, as well as its high potential for abuse and addiction, in 2010, the U.S. Food and Drug Administration (FDA) banned Darvocet.

At the time, according to the U.S. Drug Enforcement Administration (DEA), Darvocet was among the top 10 most abused drugs in the country. Also at that time, an estimated 10 million people were taking Darvocet and other painkillers like it, according to a WebMD report.

Even though it has been banned for nearly 10 years, Darvocet can still be found if someone is looking for it. It can often be purchased illegally over the internet.

How Does Darvocet Work?

Even with the extra ingredient of acetaminophen, Darvocet works in basically the same way as other drugs in the opioid family. It mimics natural opioids in the body to bind with opioid receptors.

The opioids created by your body are a kind of neurotransmitter that is used to help regulate and manage feelings of pain and stress. They do this by inhibiting pain-based nerve signals to keep them from reaching the brain. Opioids slow down activity in the central nervous system.

Darvocet enters the brain and binds with the opioid receptors to activate them repeatedly until the nervous system and brain are flooded with an excess of opioids, producing much more intense feelings of sedation and pain relief.

Except, unlike much more potent combinations of opioids and acetaminophen, such as Vicodin, Darvocet is fairly weak, with limited pain-relieving effects. Because of this, people do not typically abuse Darvocet for pain relief but instead for the impact it also provides by raising the levels of dopamine in the brain.

Dopamine is another kind of neurotransmitter, which is located in the brain’s “pleasure center.” It causes strong feelings of euphoria and intoxication when released in excess, which is what Darvocet, and opioids in general, do.

What are the Signs of Darvocet Addiction?

Being able to spot the signs of substance abuse and growing dependency and addiction is not always as easy as people might think. The symptoms and behaviors associated with addiction don’t usually appear all at once, and isolated signs can often fly under the radar in the moment. Many times, it is only after someone exhibits the signs or negative effects of substance abuse that a pattern of behavior is recognizable.

That being said, some fairly extreme physical side effects associated with long-term Darvocet abuse make it harder to miss. One significant example is yellowed, jaundiced skin from excess acetaminophen’s toxic effects on the liver.

According to RxList.com, other side effects of regular Darvocet abuse include:

Hallucinations (seeing or hearing things that are not real), elation, and discomfort are other side effects.

In addition to those side effects, Darvocet use can result in dependence. That dependence is established when someone gets used to having Darvocet in their bodies. Once the drug exits the system, they experience bodily disturbances, which are considered withdrawal symptoms.

According to the FDA, those symptoms of withdrawal include:

When Addiction is Present

When someone loses control of their Darvocet abuse and begins using compulsively and obsessively, the person has made the transition from substance abuse to addiction. This transition is generally marked by an increase in abnormal behavior consistent with a substance use disorder.

Darvocet becomes the main focus of the person’s life, and thus, the person will be unable to stop using, even in the face of deteriorating relationships, financial issues, legal problems, negative health effects, and more.

Other signs of Darvocet addiction include:

If you are experiencing these signs of Darvocet addiction or have observed them in the behavior of someone you care about, it is vital that you get help from a professional addiction treatment center as soon as you can to avoid the risk of a potentially fatal overdose.

What is Involved in Darvocet Addiction Treatment?

When it comes to substance abuse and addiction treatment, medical detox is almost always a key first step. Detox is the process of removing any drugs, alcohol, and associated toxins out of someone’s system to treat acute intoxication as well as achieve physical and mental stability. 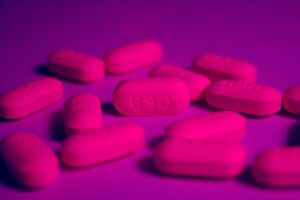 This is especially important in the case of Darvocet due to its extreme toxicity and the high potential for liver failure. As an opioid, the symptoms of Darvocet withdrawal tend to be on the milder end of the spectrum when compared to other substances like benzodiazepines.

However, Darvocet detox should never be attempted alone or without some level of professional medical intervention. Darvocet use must be tapered down slowly and carefully to avoid triggering more potentially uncomfortable and painful symptoms. This can be done through the use of MAT, wherein Darvocet is replaced by a much less dangerous opioid such as methadone or Suboxone, which is then also slowly tapered down in the goal of eventually stopping use.

Once someone has completed detox or is engaged in ongoing MAT therapy, the next stage of Darvocet addiction treatment is entering an addiction recovery treatment program, which can be done on either an inpatient or outpatient basis.

There are different subtypes of both treatment programs, but essentially, inpatient treatment involves living onsite at the treatment facility throughout the recovery program, while outpatient treatment allows someone to continue living at home or a sober house and commuting to the treatment center for regular therapy sessions and medical check-ins.

Detox is important because it helps stop Darvocet from causing any further mental and physical damage, but it does not do anything to address someone’s addictive behaviors or the underlying issues behind them, which is necessary to successfully maintain long-term sobriety.

How Dangerous is Darvocet?

The fact that Darvocet was decried for being not medically useful enough to justify all of its very serious and life-threatening side effects since nearly the entire time it was available paints a pretty clear picture of just how dangerous Darvocet was just to use as prescribed, let alone abuse.

Using Darvocet as intended can and frequently did lead to seizures, lethal arrhythmia, and pulmonary toxicity, as well as increased feelings of depression along with suicidal thoughts or behavior.

The presence of acetaminophen in Darvocet also means that regular users are likely to experience major kidney and liver damage, even to the point of total liver failure in the case of acetaminophen poisoning, if large enough doses of the drug are taken.

People may use Darvocet with other depressants like benzodiazepines, alcohol, or other opioids for a stronger sedative effect, rapidly increasing the risk of overdose. It is also possible for someone to overdose on Darvocet on its own.

The symptoms of a Darvocet overdose include:

If someone is experiencing a Darvocet overdose, they will need to receive emergency medical attention as soon as humanly possible, as those who overdose on Darvocet typically have less than an hour during which they can be successfully resuscitated.