Smoking and Snorting Heroin: What You Should Know

It is derived from morphine, but it is two to four times more potent. Morphine is a natural substance extracted from the seedpod of opium poppy plants.

When people abuse heroin, they often inject it. The drug can also be smoked and snorted.

Heroin can have many appearances.

Pure heroin is a white powder with a bitter taste and minor odor. Street heroin can be white, tan, brown, gray, or black. It can be a fine, fluffy powder, coarse-like sand, chunky, gummy, or a sticky black substance.

Other names for heroin include big H, horse, hell dust, black tar, smack, junk, dope, brown, Manteca, Mexican tar, and fairy dust. The slang names come from what the drug looks like or from where it originates.

What Methods Can Be Used to Take Heroin?

Heroin can be consumed in numerous ways.

Methods of use include:

The method of use is often dependent on the purity of the drug and user preference.

What Method Has The Highest Rates Of Addiction?

Injection has the highest rate of addiction since the user develops a tolerance to the drug more quickly than other methods of use. Building up a tolerance means that a user will have to incrementally increase dosages and the frequency of consumption to feel the same high.

Physical dependence will result from long-term use of heroin. It constitutes a substance use disorder (SUD) when continued use of the drug creates issues in a person’s life that disrupt responsibilities at work, school, or home. These issues can be mild to severe with addiction being the most severe.

Sharing drug injection paraphernalia while experiencing impaired judgment from heroin use can increase the risk of contracting infectious diseases, such as HIV and hepatitis.

What Happens After Someone Injects Heroin?

All forms of heroin can be injected, but brown base heroin needs to be dissolved in a weak acid prior to injection.

Injecting heroin is the most dangerous method of intake, but users find it to be the most economical since the drug gets directly into their system with an instant high.

Users will feel the short-term effects of:

What Happens After The Initial Surge Of Euphoria?

After the initial surge of euphoria, a heroin user’s condition vacillates between drowsiness and wakefulness. Their mental functioning will be blurred.

Injection is the method by which the user will feel the effects the quickest. Mainlining can result in euphoria within seven to eight seconds.

Differences With Snorting or Smoking Heroin

If a user prefers to snort or smoke heroin, they may not feel the same intense “rush” as injection drug users, but they will experience the other effects.

The availability of pure heroin is becoming more common and creating a shift to sniffing and smoking, especially for young users. Smoking heroin will result in a user feeling the effects in 10 to 15 minutes. There is also a misconception that smoking heroin instead of injecting it will not lead to addiction.

Most street heroin is cut with other substances like cocaine or other opiates. When heroin is combined with crack cocaine, this method of use is known as speedballing.

Additional ingredients that may include non-intoxicating substances like sugar or starch are added to batches of heroin. These may result in blockages of blood vessels and enduring problems with the vital organs.

Additives can alter the taste, smell, or high associated with heroin. The more adulterants heroin has, the lower the purity.

There is the potential that heroin can be cut with toxic substances which can lead to death or irreversible health damage.

Users often prefer smoking due to the availability of purer heroin. Smoking is also a preference for some users due to the fear of sharing needles and contracting a disease.

All forms of heroin can be smoked, but brown base heroin works the best for this method of use.

Aside from injection, smoking is the fasted way to get heroin into a user’s system. Users get the same rush as they do from injection heroin use, along with fewer health risks, such as transmitting hepatitis or other infections.

Users can smoke brown or tar heroin by placing it on aluminum foil and then heating the foil until the heroin vaporizes. At this point, the user inhales the vapors through a straw.

Some users also smoke white powder heroin in cigarettes by rolling the dope and tobacco or marijuana together. Some cook their dope and squirt it onto the cigarettes.

All types of heroin can be snorted, but some work better than others.

Heroin is snorted up the nose through a straw or a rolled-up dollar bill. It takes approximately 10 minutes to feel the effects of snorting heroin. 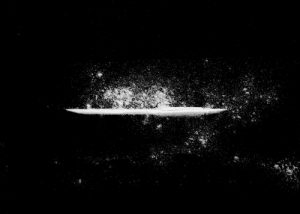 Chunky heroin and tar heroin should be ground up to a fine powder before snorting. Some users dissolve dope in water and then squirt it up their noses with a syringe barrel (with the needle taken off).

This is known as she-banging or waterlining.

Snorting has fewer health risks than injecting heroin, but an overdose is still very possible.

What are the Effects of Heroin?

Heroin penetrates the brain expeditiously and binds to opioid receptors in a multitude of areas, notably those involved in pain, pleasure, controlling heart rate, sleeping, and breathing.

What Are Long-Term Effects Of Heroin Use?

Long-term effects of heroin use include the following:

Is It Possible to Overdose on Heroin?

Yes. Heroin is highly addictive and an overdose can occur when a user’s intake of the drug is too much for the body to process. The respiratory system is depressed too much, and the person may stop breathing.

The US Centers for Disease Control and Prevention (CDC) reports increases in the number of heroin overdoses in the last few years.

The increasing number of opioid overdoses has resulted in public health efforts to make naloxone available, which can reduce the effects of an overdose if given immediately. Naloxone binds to and blocks opioid receptors from the effects of heroin and helps the user to begin breathing again.

It is imperative to get the person overdosing to a medical professional as quickly as possible even if naloxone has been given.

If someone who has been using heroin long term suddenly stops, they most likely will experience symptoms of withdrawal.

Is the Damage of Heroin Use Reversible?

Treatments for heroin addiction include medications, such as buprenorphine and methadone, to help with the withdrawal process and behavioral therapies such as cognitive behavioral therapy (CBT) and contingency management. CBT helps individuals to manage life stressors and modify their drug use behaviors.

Utilizing both medications and behavioral therapies under the guidance of mental health and medical professionals supports the restoration of brain function and behavior. This increases employment rates and lowers both criminal behavior and the probability of contracting a disease.