Hydrocodone is an important prescription opioid painkiller, but it is widely abused. Like other opioid painkillers, from heroin to codeine, hydrocodone is potentially addictive. The drug is prescribed as an oral medication, either for immediate release when combined with acetaminophen, or in extended release form by itself.

People who struggle with hydrocodone addiction may develop a tolerance to this drug, meaning they feel like they need more of this drug to get the original effects. For those taking hydrocodone as prescribed, tolerance can still develop. Doctors recognize tolerance to hydrocodone in their patients who report feeling more pain more often or more surges of pain. When someone abuses hydrocodone for nonmedical reasons, however, tolerance will involve feeling less euphoria and relaxation when the regular dose of the drug is consumed.

There Are Various Signs Of Opioid Abuse, Including Addiction To Hydrocodone.

Another way that people often get high faster from hydrocodone includes consuming the drug non-orally. Other ways of abusing drugs, illicit or prescription, include crushing and snorting the substance, smoking it, or mixing it with alcohol or water and injecting the mixture into a muscle or vein. Because these methods do not involve the digestive system, the drug being abused will enter the brain and bind to receptors much faster. Abusing any drug in this way, including hydrocodone, means you are at greater risk of having an overdose.

Warning labels on prescription bottles of hydrocodone issued by doctors, and even in medical information online, are clear: Do not crush and snort hydrocodone. It is very dangerous because the drug rapidly enters the bloodstream and binds to brain receptors, leading to a fast high and a greatly increased risk of overdose.

Although snorting is not the fastest way to push hydrocodone into the brain, it is much faster than orally consuming the drug. People who have a prescription for hydrocodone can easily crush the tablets and then snort the powder.

Aside from a rapid, addictive high, increased tolerance and dependence, and a greatly increased risk of overdosing on hydrocodone, snorting this potent drug can cause some other health problems.

Although snorting is one of the more common ways of abusing hydrocodone, it is possible that a person may crush and smoke the drug instead. Smoking is the fastest way to get drugs into the bloodstream and to the brain. For example, with a drug like tobacco, it is inhaled from a cigarette or pipe, and the drug travels into the lungs on the inhale, along with air; in the lungs, tobacco is absorbed through the alveoli and into the blood much faster than snorting the drug would send it through the mucous membranes. 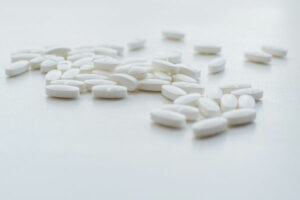 The faster a drug reaches the brain, the faster it binds to receptors, which means it is much more likely to become addictive. For an already potent drug like hydrocodone, this also dramatically increases the risk of overdose.

The full risks of smoking hydrocodone are not well understood because it is not a common practice. However, some medical research on smoking heroin indicates there are substantial risks involved when smoking an opioid like hydrocodone. Researchers found that some heroin metabolites could cause a form of damage called leukoencephalopathy, which is the term describing a group of conditions impacting the white matter of the brain. Damaging these areas can lead to a loss of motor functions and cognition, which may become permanent.

Additionally, smoking any drug, including hydrocodone, damages the lungs, which increases the risk of infections and cancer.

The Potential for Overdose and Death

The greatest risk of taking hydrocodone without a prescription, or in ways not prescribed, is an overdose. Smoking and snorting both increase a drug’s potency, so abusing hydrocodone in either of these ways means the drug will enter the brain faster, cause a rapid high, and thus increase the risk of overdose.

There Are Signs Of A Hydrocodone Overdose To Look For. They Include:

If someone shows any of these signs of overdose, call 911 immediately. Medical professionals can use drugs like naloxone to temporarily reverse the overdose, but the person needs ongoing treatment and hospitalization to ensure they do not die from oxygen deprivation.

The U.S. Centers for Disease Control and Prevention (CDC) reports that as many as 115 people die in the United States every day from opioid overdoses, including on prescription narcotics like hydrocodone. If you are worried about yourself or a loved one, get help to address this problem.