Snorting or Smoking Kratom: Can You Do It Safely?

Kratom is a controversial drug in the United States. The Food and Drug Administration (FDA) has consistently reported concerns about the substance and how it is marketed in the U.S. The most recent was issued in September 2018, which reiterated that there are no known medical benefits to kratom, especially when the drug is applied to withdrawing from opioid addiction, which is one of the most common applications of this naturally occurring drug.

The origins of powdered or dried kratom is a tree in Southeast Asia, whose scientific name is Mitragyna speciosa. The leaves from this tree contain a chemical called mitragynine, which has opiate-like effects. In some preparations, kratom can have mild stimulant effects.

Technically, kratom is not illegal in the U.S. Although several states and cities have restricted its sale or outright banned it, and the U.S Food and Drug Administration (FDA) has restricted the import of this drug, the substance has no specific federal bans. Kratom is sold primarily online, but it may be found in supplement stores or headshops. It has been touted as a treatment for various conditions, such as:

Initially, kratom’s leaves were dried and brewed into a tea or smoked. Now, the substance is sold as capsules, pills, powders, or extracts so that it can be orally consumed without any preparation. Sometimes, the dried leaves are sold, and they may be eaten or smoked. Snorting the powder is not common, but it does occur.

Kratom is believed to be addictive because people who abuse the drug show some characteristics that are similar to other forms of drug addiction – primarily, physical dependence and compulsive behaviors to take more to get high. When the body becomes dependent on a drug, and you try to quit, you may experience withdrawal symptoms. Kratom does have associated withdrawal symptoms, which are like opioid withdrawal symptoms. Among them are:

Regardless of how kratom is consumed, it is intoxicating and can lead to abuse and addiction. Various side effects associated with kratom include:

Some people have reported psychotic symptoms when they take kratom. This drug has many effects like opioid drugs, but when too much kratom is taken, the side effects can be much worse and even dangerous.

It is possible to overdose on kratom, with the FDA reporting at least one instance so far of pure kratom being the only drug involved in overdose. In 2017, the FDA reported that it knew of 44 deaths associated with kratom in some way, although many of the overdose deaths involved other chemicals that had been mixed into kratom, which the person consuming the drug did not know about. Some other individuals had abused multiple substances before overdose, of which kratom was one.

For the most part, kratom is consumed orally, with capsules, pills, liquid, or tea being the preferred forms. Some people smoke kratom or, more rarely, snort the powdered version. These methods of abuse are dangerous because they increase the speed at which the drug enters the bloodstream, making kratom potentially more addictive and increasing the risk of overdose and death.

Snorting Kratom: Not Documented, But Possible

Typically, snorting a drug forces the chemical into your bloodstream faster than oral consumption. When drugs move through the stomach and intestines, they are either absorbed through the walls of the stomach, or the intestinal lining. This means that peak effects can take an hour or two to occur, as the chemical’s level in your blood increases and then plateaus. Snorting, however, forces the intoxicating substance to enter the bloodstream through your mucous membranes. The chemical then travels to your brain faster, binding to receptors and leading to a quick, intense high, which also goes away faster than with oral ingestion.

It is possible to snort kratom extracts, especially the powder, but this practice is rare enough that it is undocumented in the U.S. Part of the reason kratom is rarely snorted is that the drug has few effects in people who have abused other central nervous system (CNS) depressants, particularly opioids. It may make the person feel normal, a sign of tolerance and dependence on opioid-like chemicals, but kratom does not lead to intoxication for this group. However, in people who are opioid naïve, kratom will lead to a high, but orally ingesting the drug can produce this effect.

Another reason few people snort the drug is that large amounts of cellulose and plant fiber are found in kratom.  With so much extra material that is not intoxicating in even the powdered form of kratom, a lot of the drug would need to be snorted before any of it became bioavailable. In contrast, brewing a tea or consuming capsules allows for a significant amount of mitragynine to be digested into the bloodstream.

The powdered kratom extract is produced inefficiently, reducing the amount of intoxicant available in that form. The leaves are dried and ground up, and then boiled in water until all the water evaporates, leaving a fine powder behind. Any larger chunks are pulverized.

Some research reports that the alkaloids in kratom are not absorbed easily into the bloodstream through the mucous membranes, unlike with powdered opioids. Snorting the drug may lead to damage to the nose, throat, and upper respiratory system, but it is not likely to get you high. Damage can range from nosebleeds to lung infections to pulmonary embolisms, or blood clots that form in the lungs and stop blood flow.

Smoking Kratom: Uncommon But May Increase

Smoking a drug like heroin or cocaine forces the substance into your brain faster than snorting. This is because smoking pulls the intoxicating substance into your lungs, where the chemical is absorbed by the alveoli along with oxygen, which is then rapidly passed into the brain. Smoking leads to faster highs than snorting and much faster highs than eating or drinking a drug. The only method of substance abuse faster than smoking is injecting the drug directly into your veins.

In Southeast Asia, where the drug originates, the primary method of ingesting kratom leaves is chewing them; however, dried leaves may be 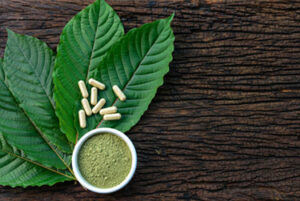 chewed, brewed into a tea, or, much more rarely, smoked. Sometimes kratom is smoked in the U.S., although this practice is equally rare. Since kratom is primarily sold in capsules or pills, it is clearly intended for oral ingestion. Dried leaves may be smoked, or the powder may be smoked in a pipe. There are very few reports of this occurring, though.

Still, anecdotal reports of smoking kratom suggest that the drug’s stimulant properties affect the brain, along with its opioid effects. Similar effects occur when the drug is chewed, as the chemicals are macerated out of the leaves and absorbed through the mucous membranes of the mouth and throat. The effects of smoking kratom are also compared to tobacco or marijuana since the drug produces mild stimulation but more relaxation.

While smoking kratom is a sometimes-reported method of ingestion, it is considered as effective as taking the drug in capsule form, chewing it, or drinking kratom tea. It also can cause more long-term physical harm than oral consumption because smoking drugs is associated with an increased risk of cancer and lung disease. Kratom leaves reportedly have a naturally high tar content, so like cigarettes, those chemicals will be released into the lungs when the drug is smoked.

A Form of Substance Abuse that Requires Treatment

While many people begin abusing kratom because they want to end their opioid addiction but are not sure about the time and cost of detox and rehabilitation, this drug has no guidelines for dosing or tapering procedures. In contrast, working with licensed addiction specialists in a medically supervised detox program can provide you with medication-assisted treatment (MAT) to help you taper off dependence on opioids. You also can get resources from addiction specialists on appropriate rehabilitation programs, which can change your behaviors around drugs and alcohol.

Kratom has no medications to aid the detox process, but medically supervised detox programs can monitor withdrawal symptoms and ease specific symptoms like nausea or pain. Abusing kratom is harmful to your health and may lead to an overdose, especially if you relapse to opioid abuse and accidentally combine these substances.