MAT for Alcohol Abuse: How to Use It Correctly

The U.S. Food and Drug Administration (FDA) has approved three medications to treat alcohol abuse. None of these medications are directly designed to address the withdrawal symptoms that occur in the early stages of recovery for many individuals who have been diagnosed with alcohol use disorders.

The American Society of Addiction Medicine (ASAM) recommends that benzodiazepines, particularly long-acting benzodiazepines such as Librium (chlordiazepoxide) or Valium (diazepam), be used to treat alcohol withdrawal. Benzodiazepines will reduce distress from the withdrawal symptoms associated with discontinuing alcohol use and also protect the person from the possibility of developing seizures during withdrawal, which can be fatal.
When benzodiazepines are used for alcohol withdrawal, they are administered on a schedule under the supervision of a physician. The physician starts with a dose of the drug that controls the withdrawal syndrome. At specific points of recovery, they decrease the dose to allow the person to be weaned off the drug. Eventually, the medication can be totally discontinued.

Other medications may be used to address withdrawal symptoms from alcohol, but the primary approach is to use benzodiazepines.

Which Medications Are Approved to Treat Alcohol Abuse?

FDA-approved medications that are used in the treatment of alcohol use disorders are:

Campral is designed for a person who has already stopped drinking alcohol or significantly cut down on their alcohol use and wishes to avoid alcohol. It helps people reduce the amount of alcohol that they drink, but it does not address alcohol withdrawal symptoms, counteract the effects of alcohol if they have been drinking, or prevent people from drinking alcohol.

It most often is administered within the first week of abstinence (typically around the fifth day of abstinence). It is taken three times a day.

The medication has been demonstrated to reduce the amount of alcohol consumption in people who have chronic alcohol use disorders and are also in other forms of treatment, such as ongoing therapy or participation in 12-step groups.

Campral requires a prescription from a physician.

Antabuse is designed to treat people who have chronic alcohol use disorders. The medication is most effective when it is used by a person who has already undergone a medical detox program or is in the very early stages of abstinence.

Most often, the drug is taken in tablet form once a day in the morning.

It produces very unpleasant side effects if the person drinks any alcohol. These include nausea, vomiting, difficulty breathing, chest pains, and headache. The medication interacts with the alcohol to produce these effects, and they can occur rapidly after the person drinks alcohol (as soon as 10 minutes).

People should not take the medication for at least 12 hours after they drank alcohol, or they will experience these effects.

Antabuse can only be obtained with a prescription from a physician.

ReVia is used to reduce cravings for alcohol. In some cases, it may also block some of the effects of alcohol if a person drinks after they have taken the medication. 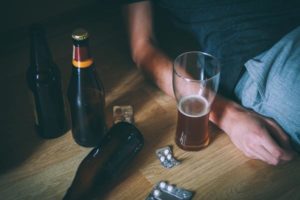 drinking and increase their motivation to remain in treatment. The medication was developed to reduce cravings for opiate drugs like heroin, but it also appears to be very effective at reducing cravings for alcohol. Therefore, it is often used in the treatment of an alcohol use disorder.

It is only available with a prescription from a physician and should only be used under a physician’s care.

Other MATs for Alcohol Abuse That Are Not FDA-Approved

Physicians are free to use other medications in a medication-assisted treatment program to help with specific symptoms, such as lethargy, inattention, nausea, and other symptoms that are not fully addressed by the medications mentioned above.

Two anticonvulsant medications, Neurontin (gabapentin) and Topamax (topiramate), have mixed research support to suggest that they might reduce cravings in people with alcohol use disorders. Some doctors may use them off-label for this purpose.

The Benefits of MAT

However, the use of MAT does not cure an individual of their issues with alcohol. These medications are used to assist the recovery of an individual with alcohol use disorder. They are not considered to be standalone treatments and should be used in conjunction with other professional interventions, primarily therapy.

To ensure an individual gets the most out of MAT for alcohol abuse:

The treatment should be supervised by a physician. All medication-assisted treatments are prescription medications, and benzodiazepines are controlled substances. The medications should always be used under the supervision of a physician and according to the prescribed instructions.

When the medication is discontinued, the recovery program is not over. In most cases, people who use MAT for alcohol use disorders will eventually be taken off the drug. This does not imply that the individual’s recovery is complete or that their treatment is over.

To get the most out of a recovery program that uses MAT, one should adhere to the above principles. These medications can help an individual in a particular stage of recovery to move forward in their drive to be independent and free from alcohol abuse.