Some substance users want something they can “slow down” with, while others want to “speed up.” Those who fall into the latter group might use cocaine, certain designer drugs, or methamphetamine, a stimulant that speeds up the central nervous system.

As the National Institute on Drug Abuse explains, methamphetamine (meth for short) is similar to the drug amphetamine, which is used to treat attention-deficit hyperactivity disorder (ADHD) and the sleep disorder narcolepsy. The drug is legally sold by prescription in the U.S. under the trade name Desoxyn. However, recreational meth is illegally produced and circulated throughout the country.

Recreational meth use has long been deadly, but U.S. government authorities are warning of seeing more drug deaths occur as a result of “speed balling.” This dangerous practice occurs when users mix an opioid, like heroin, with a stimulant, like meth. Combining these drugs makes them more dangerous when used alone. According to an October 2021 NIH Research Matters report, “risky patterns of methamphetamine use and the diversity of people who used methamphetamine increased between 2015 and 2019.” The report, which cites a 2021 study published in JAMA Psychiatry, mentions that methamphetamine use disorder (MUD) without injection has increased tenfold among Black Americans and people in the 18-23 age group.

In recent years, law enforcement authorities have been making more drug busts that contain meth in various parts of the U.S. A news roundup from the U.S. Drug Enforcement Administration (DEA) also shows how widespread meth use and addiction are in the country. In 2021, a record-breaking bust at the Mexico border yielded nearly 18,000 pounds of meth packed in 6,106 packages found inside a truck, according to Fox News. One-hundred sixty other packages found contained nearly 400 pounds of illegally made fentanyl, a drug that is up to 100 times more potent than heroin that is believed responsible for the increase in drug overdose deaths in the past few years.

Methamphetamine is a potent central nervous system stimulant. It is one of the most addictive drugs in the United States. The easy-to-make substance continues to be illegally produced throughout the U.S. and illegally imported from Mexico. Per the 2020 National Survey on Drug Use and Health (NSDUH), 0.9% aged 12 and older (2.5 million people in the U.S.) used meth in the past year. As the age increased, so did the percentages of users, the survey says.

Illegally obtained cold medicine ingredients, such as ephedrine and pseudoephedrine, are commonly used in meth. The drug is “cooked” in secret labs using these ingredients and many others, including:

Regular meth can be taken as a pill or powder. But there’s also crystal meth, which looks like fragments of glass. It can also be taken as a 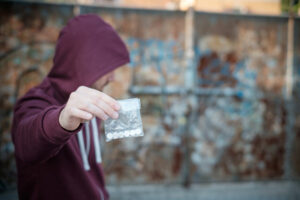 blue-white rock that is shiny, according to the DEA. Meth is commonly smoked, swallowed, snorted, or injected for a high. Some users take more of the drug to make their high stronger. As noted earlier, some may mix the stimulant with an opioid (depressant) for a “speedball” effect. Speedballs give users a rush before bringing them low, making them drowsy and disoriented. While cocaine is commonly used with an opioid, meth use for this purpose is also on the rise, as noted earlier.

While meth speeds up the central nervous system, which includes the brain, the effects of the high can vary, depending on how a person takes it. Smoking or injecting the drug affects the bloodstream quickly, giving the person an intense, euphoric but brief rush. If ingested orally or snorted, the high can last longer.

According to the DEA, whether a person feels a rush or a high, both are believed to result from high levels of the brain chemical dopamine being released into the region of the brain responsible for pleasurable feelings. Over time, this flood of dopamine is harmful. Addiction is among the effects of long-term meth use and abuse. Whether taken in small amounts or chronically, meth users can experience:

Many users adopt a “binge and crash” routine when the drug’s high wears off. This can lead them to use more of the drug before that happens. They may forget to eat, sleep, and go several days or nights without doing either of these because they’re busy seeking the next fix.

Besides “meth” or “crystal meth,” meth may be referred to on the streets as:

What Are the Signs of Meth Addiction?

People with meth addiction may be able to hide it for a while, but in the end, there are tell-tale signs that a person is using meth or crystal meth. A person may be using meth if you notice:

People in active meth addiction are also prone to sudden angry outbursts, violent behavior, unprovoked mood swings, and extreme personality changes. Per the DEA, researchers report that up to 50% of brain cells that produce dopamine can be damaged because of prolonged meth use.

A person who is dependent on meth may also show the following signs:

What Is Involved In Meth Addiction Treatment?

If you or someone you know has tried to stop using meth but hasn’t been able to, it’s time to consider getting help from a treatment center that helps people with MUD. If you have been using meth for a long time, we do not recommend that you abruptly stop. Although “going cold turkey” is often glamorized, it is not the right way to stop chronic meth use. Instead, people dependent on meth should start medical detox at a professional drug treatment facility before starting a recovery program that addresses their needs.

People who stop using meth may experience anxiety, tiredness, depression, psychosis (loss of contact with reality), intense meth cravings, and more. Many people won’t be able to get through this trying period without professional medical help. Medical detox is designed to help people get through this process so that they can start a treatment program. Before they can start, however, they need to regain medical stability.

Medical detox is a critical part of the continuum of care in addiction treatment. During this period, we monitor patients 24 hours a day, ensuring they receive the medical care they need as meth and other drugs and toxins exit the body after meth use has stopped. Unfortunately, the U.S. Food and Drug Administration (FDA) has not approved any medications that specifically treat methamphetamine addiction. However, you may be given medications that address other symptoms you experience, such as headache, insomnia, or anxiety. Each person’s medical detox is customized to their needs.

You will receive the medical and emotional support you need to overcome meth withdrawal and avoid a relapse. If any medical emergencies arise during this time, medical and addiction care specialists will promptly address them. Medical detox ensures people stay on the path to recovery from substance use. It is among the safest options available to overcome substance abuse and addiction.

After detox ends, people with moderate-to-severe methamphetamine use disorder may start their recovery program on-site at a facility for up to 90 days (three months). The National Institute on Drug Abuse (NIDA) recommends that people with SUDs participate in treatment for a long period as it is thought that a longer stay can have a longer-lasting outcome.

An inpatient/residential setting promotes a full-time focus on sober living and understanding the cause of someone’s addiction. The monitored, structured environment keeps patients focused on their recovery by offering minimal distractions and full service so that all their needs are met.

During their stay, patients attend therapy sessions to understand themselves and their meth use problem better. They also learn how to manage their lives without substance use. They may participate in therapies, such as cognitive behavioral therapy (CBT), which shows them how to recognize self-defeating and irrational thoughts that could lead them back down the path they want to leave behind. There are various types of therapies, including those for the individual, groups, and families. Twelve-step support groups and activities that promote health and wellness are also part of an inpatient/residential program.

Partial hospitalization programs (PHPs) are a step down from inpatient/residential. They are less structured and give patients more flexibility and responsibility. However, they require at least 20 to 25 hours of intensive therapy a week, which makes them not as loosely structured as an outpatient program. Although, in some cases, PHP can serve as a form of outpatient treatment for some people.

PHPs give people with medical stability more time to address their meth dependence before they go back to living on their own. They may live in transitional housing while receiving PHP services as they commute to a facility to receive therapy three to five times a week.

PHP patients receive therapies and address relapse prevention strategies. They also may attend sessions addressing subject areas like addiction education, life skills, and more. They may also join a 12-step program during their time in PHP.

Recovering meth users can leave residential/inpatient or PHP and continue their therapy and other treatment programs in an outpatient setting. Depending on where they are in their recovery, they may need intensive outpatient (IOP), which requires nine or more hours of therapy a week. If they can continue in outpatient (OP) treatment, they will receive fewer than nine hours.

How Dangerous Is Meth Overdose?

It is possible to overdose on meth. Overdose means you have taken too much of the drug, so the body reacts negatively. Any sign of overdose needs prompt treatment. Time is important as delayed care increases the risk of a fatal injury. People who take high doses of the drug can suffer a life-threatening stroke, heart attack, and organ complications brought on by overheating.

If you or someone you know is exhibiting these symptoms after using meth, get emergency medical help now by calling 911 or visiting your nearest hospital emergency room or medical facility.