How Long Vicodin Stays in Your System: Blood, Urine & More

Vicodin can be detected on a urine test for two to four days after use.

It can be detected on some hair follicle drug tests for up to 90 days.

Blood tests are not used to detect Vicodin.

Vicodin is an opioid that doctors may prescribe for moderate-to-severe pain. It is a common drug of abuse that has the potential to lead to addiction.

In the U.S. in 2011, 41,531 women and 40,948 men went to the emergency room for an issue related to nonmedical use of hydrocodone, which is the medication used in Vicodin. Of the prescription opioid pain medications people abuse, only oxycodone caused more people to require emergency medical treatment.

Vicodin is a combination of acetaminophen and hydrocodone. The acetaminophen component of this drug increases a person’s threshold for pain. This makes it easier for the body to handle the pain it is experiencing. This part of Vicodin is ideal for tackling more minor levels of pain.

Hydrocodone is an opioid that blocks certain nerve cell receptors. This component of Vicodin handles the moderate-to-severe elements of pain.

When someone takes this drug, they may experience several common side effects.

What is the Half-Life of Vicodin?

The half-life of a drug is the time that it takes for the drug to get to half of its starting dose in the body.

Vicodin has a half-life of 3.8 hours. If someone takes 10 mg (milligrams) of Vicodin, it will take about 3.8 hours for about 5 mg of this drug to be flushed from the body. This is assuming that the person taking the drug is relatively healthy and does not have any issues with their liver or kidneys.

Since the half-life of Vicodin is relatively short, it poses a higher risk of dependency compared to drugs that have a longer half-life.

If someone has been taking this medicine for a prolonged time, they will begin to experience withdrawal symptoms once the drug processes out of the body. Withdrawal symptoms can begin as soon as six hours after the last dose, but it may be up to 24 hours before these symptoms occur.

How Long Does Vicodin Stay in the Body?

When someone undergoes drug testing for Vicodin, the person performing the test may look for traces of the drug in their saliva, urine, blood, or hair. This drug remains in each of these for different amounts of time. 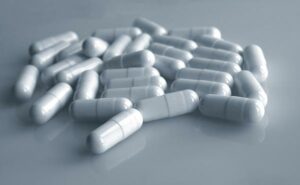 Exactly how long Vicodin stays in a person’s system depends on several factors, such as their function, how much of the drug they have taken, and how long they have been using Vicodin.

If someone only took one 10 mg tablet, it is unlikely that the drug would be detectable in their urine after two to three days, as long as their liver function is adequate. If someone has been using Vicodin daily for several months, it is more likely that they would test positive on a drug test for longer.

Other factors that can influence how long this drug remains detectable in the body include:

How Long Does It Take to Fully Detox Vicodin From the Body?

After taking the last dose of Vicodin, a person may start to have withdrawal symptoms in about 12 to 48 hours, on average. The symptoms are usually at their worst for the first 24 to 96 hours after they begin. They start to improve five to seven days after they start.

Medication-assisted treatment (MAT) is often used to mitigate cravings and lessen symptoms of withdrawal from opioids.

This allows people to fully focus on behavioral therapies that can help them recover from addiction.

A doctor will prescribe a starting dose of methadone or buprenorphine that controls withdrawal symptoms and cravings. Over time, the dose of the medication is gradually lowered until the person is no longer taking any medication at all.

Anyone who has become dependent on Vicodin may experience withdrawal symptoms.

They range in severity depending on how long the person was using the drug, how much Vicodin they were taking, and individual factors.

During the early part of Vicodin withdrawal, the following symptoms are possible:

Later in the withdrawal process, the following symptoms may occur:

The Best Way to Pass a Drug Test

Vicodin does not tend to stay in the body for too long. If you have not used Vicodin within the past four days, it’s likely that you will pass a urine drug test.

The best way to pass a drug test is to refrain from drug use. If you regularly abuse Vicodin, this can seem like an impossible feat.

You can stop using all substances of abuse with professional help. And if you can’t stop using on your own, it’s a clear sign that you need help.

If you have been using Vicodin regularly for more than a few weeks, consult a professional before you attempt to stop use.