The potent synthetic opioid analgesic medication fentanyl has elevated the U.S. opioid drug crisis to deadly, never-before-seen levels. The rapid increase in fentanyl-related deaths has marked the start of the third wave of the opioid crisis in the U.S., according to a National Public Radio (NPR) report that highlights a March 2019 report from the U.S. Centers for Disease Control and Prevention (CDC).

The government agency reports that the rise in opioid overdose deaths in the United States happened in three phases. The first started in the 1990s, when prescribing and use of prescription opioids, such as OxyContin, increased; the second wave, which began in 2010, brought a rapid increase in heroin-related overdose deaths.

The third phase now underway as of this writing has been traced to 2013, the year when illicit fentanyl started to drive up opioid overdose deaths among men, black and Latino Americans, and young adults ages 25 to 34. The CDC’s report studied trends in drug overdose deaths involving fentanyl from 2011 to 2016.

Fentanyl is a synthetic opioid medication prescribed to treat severe, chronic pain. The depressant drug quickly affects the central nervous system, slowing down heart rate, breathing, and blood pressure. It also lowers one’s body temperature and acts on the body’s pain receptors, blocking out pain throughout the body. Because of its effects on the body, one can easily overdose on fentanyl, and it doesn’t take much.

“Just 2 to 3 milligrams of this drug can kill a person,” writes Drugs.com. Picture five to seven individual grains of table salt, and that’s just how little fentanyl it takes to overpower someone and take the person’s life.

According to the National Institute on Drug Abuse (NIDA), the drug is 50 to 100 times stronger than morphine, and 25 to 30 times more potent than heroin, reports the U.S. Drug Enforcement Administration.

The drug’s therapeutic benefits help to make pain management effective when used as intended. However, on the black market, illicit fentanyl is used for reasons that have little to do with pain. People who misuse and abuse fentanyl do so to feel relaxed and enter a state of well-being known as euphoria. They also become sleepy, sluggish, and can experience problems with memory and thought processing.

One reason the third wave of opioid abuse is so deadly is many users are unintentionally abusing the drug, as it often is a part of a combination involving other potent substances. Recreational fentanyl users may not even realize they are in this category, and they may not survive once it is realized they have ingested the lethal substance.

On the street, drugs are often passed off as one thing, but they either are drugs cut with the potent opioid or actual fentanyl itself. That means pills cut to look like Xanax (alprazolam) or Vicodin (hydrocodone) on the streets could actually be fentanyl or a mix of substances combined with fentanyl. Fentanyl is also being passed off as or mixed with heroin, cocaine, and other addictive substances. The drug’s low cost, cheap production, and potency have boosted its popularity among dealers and producers.

What are Fentanyl Withdrawal Symptoms?

Recreational fentanyl use can be habit-forming and hard to stop. Frequent or longtime fentanyl users may notice uncomfortable symptoms that appear when they stop or reduce their intake of the drug. This rocky period is called withdrawal, and it happens as the body and mind attempt to adjust to the change in fentanyl use. Because fentanyl is an opioid, withdrawal from it likely will be much like withdrawal from other opioid drugs.

These symptoms are enough to make people keep using the drug so they can avoid them. This is one way to manage withdrawal, but it’s not the right way. In fact, it’s a sure way that can lead to relapse, overdose, and death, all of which can be avoided

What are the Stages of Fentanyl Withdrawal Timeline?

Fentanyl withdrawal will be unique to the person who is going through it. When managing withdrawal symptoms, frequent or longtime fentanyl users should consider certain factors such as their:

A general timeline for fentanyl withdrawal could look like the following:

Stage 1: Mild withdrawal symptoms can start within 12 hours after the last fentanyl dose. Fentanyl, however, is slow-acting because of its time-release feature. It’s possible that some users won’t feel withdrawal effects until much later, perhaps somewhere around between 20 to 30 hours after the last dose. This stage can last between 48 to 72 hours (two to three days), and during this time, body aches, flu-like symptoms, and insomnia can be experienced. 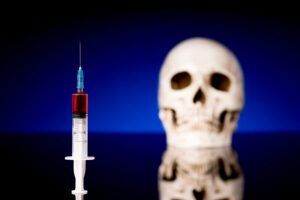 Stage 3: By the fifth day, symptoms usually lessen in intensity. Physical symptoms gradually fade within a week or two weeks, but users likely will battle through psychological cravings and changes in mood. These symptoms can last for weeks or months, even years. These symptoms are called post-acute withdrawal syndrome or PAWS. Having a treatment facility that can offer professional support can help recovering fentanyl users manage these symptoms and avoid a relapse.

A medical detox that is done properly is the bridge between addiction and sobriety. It is also an effective way to avoid the likelihood of having a relapse when drug use has stopped. The risk of relapse is particularly high in people who are trying to end their drug use on their own. They may stop using for a while, but eventually, they will go back to using to stave off the discomfort of withdrawals. This predicament alone puts them in a dangerous situation that could end their lives. Should they relapse and return to using the dosage they once did before, they can overdose and die. Medical help is necessary to detox from opioid abuse and addiction.

The medical detox process ensures that people recovering from substance abuse are kept safe as they taper off the drugs they have been using. Many people want to get off the rocky road of addiction but are not quite sure how. Impatience or desperation may drive them to take risky measures to stop their use, which includes the practice of quitting addictive substances suddenly or “cold turkey.”

This is strongly discouraged because the symptoms of drug withdrawal can be uncomfortable to deadly, depending on the kind of drug used and other factors.

In general, it is recommended that people who want to end their drug use undergo a taper that is scheduled and administered by a physician who is knowledgeable about the withdrawal process. Medical professionals will know what to do to keep patients safe as they are weaned off addictive substances and guided toward the next step in their recovery. There are treatment centers throughout the U.S. that provide comprehensive services, which can include placement in a residential or outpatient setting.

An effective addiction recovery program starts with a medical detox that takes place in a clinical setting and is overseen by medical professionals and addiction care specialists. This part of the process can take up to a week or longer, depending on the person and the situation. After detox is complete and stability is achieved, the next step is to enroll in a treatment program at a facility that provides that medical and social support needed for the person to make progress in recovery.

Individualized care is critical to getting someone to a place of mental, physical, and perhaps spiritual stability as they work to move away from addiction and toward full-time sobriety. Detox that takes place at a facility that offers inpatient or outpatient options is ideal. That way, once the detox period has been completed, the person can easily enter addiction recovery care and start healing.

Addiction care is offered on a continuum that offers various options that can help people in recovery. The two most often used are inpatient treatment and outpatient treatment.

People who enroll in an inpatient or residential treatment center receive addiction treatment on-site at a facility for a minimum of 30 days and up, depending on their particular needs and situation. During their stay, they focus solely on recovering from their addiction without distractions and triggers. They also will receive 24-hour care seven days a week in a monitored, structured setting that ensures their medical and physical needs are covered.

People in this setting will receive various therapies that can help them understand the reasons for their addiction and gain healthy ways to manage their lives as they work to put addiction behind them. Heavy fentanyl users whose chances of relapse or high may find this setting most effective.

For people with milder fentanyl dependence or who are in the early stages of addiction, outpatient treatment is available. This low-cost option allows more flexibility while delivering effective interventions that help people address their substance abuse issues.

Outpatient treatment provides all of the therapies one receives in inpatient or residential treatment, but participants attend a set number of classes or therapy sessions at the treatment facility before returning to their homes or other housing. If medications are prescribed as part of a comprehensive medication-assisted treatment program (MAT), they will be given to the client before the client returns home.

The U.S. Food and Drug Administration has approved medications that can be used to help people end their opioid dependence. These medications include buprenorphine and naltrexone as well as methadone. Counseling and social support are offered along with medical therapy to help opioid-dependent people end their addiction. Continued aftercare support, which can include 12-step programs, is strongly recommended to help achieve sobriety goals.