Newark is the largest city in New Jersey, and it’s a major metropolitan area in the Northeast, an area of the United States that has been hit hard by the addiction epidemic of the past decade. While opioids like heroin and fentanyl are key players in the rise of addiction and overdose rates in recent years, alcohol continues to contribute to public health issues related to addiction. Learn more about alcoholism in New Jersey and the need for alcohol rehab in Newark.

Alcohol is one of the most common drugs of abuse in the U.S. Its legal status and popularity make it pervasive in American culture. So much so that more than 86 percent of adults said they had tried alcohol at least once in their lives. There are an estimated 88,000 alcohol-related deaths in the United States each year.

Dangerous alcoholism often starts with binge drinking. According to the 2018 National Survey on Drug Use and Health, more than 26 percent of adults reported binge drinking.

Alcohol is often present in situations where other drugs are being taken. Alcohol may be mixed with illicit or prescription drugs accidentally, or they may be used to enhance the effects of recreational use. However, alcohol can become more dangerous when it’s mixed with certain substances. 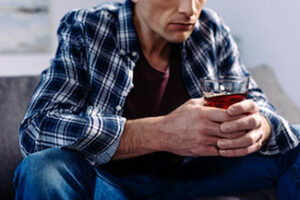 Stimulants like cocaine and amphetamines can combine with depressants like alcohol to counteract some effects. Some stimulant users do this intentionally to avoid adverse side effects. However, this practice can give users a false sense that they can handle higher doses than they actually can.

Opioids and depressants like benzodiazepines can mix with alcohol to become more potent. Together, alcohol and other depressants can cause respiratory depression and death in lower doses than if the drugs were taken individually.

New Jersey has struggled with addiction and overdose in the midst of the opioid epidemic, which has significantly impacted the northeastern U.S. Because of this, the state has responded by bolstering efforts to address public health issues that are related to drug and alcohol addiction.

Alcohol addiction is diagnosed as a severe alcohol use disorder in the DSM-5. It’s usually characterized by a continuous compulsion to drink despite consequences. Addiction is a chronic disease that can weaken the body and mind over time if left untreated. However, alcohol addiction is treatable with the right therapy options for your needs.

Alcohol rehab is a complex process that treats substance abuse as well as any underlying mental health issues or past traumas. When you enter treatment, you will work with medical and clinical professionals to assess your needs and create a treatment program. However, alcohol addiction is treatable with the right therapy options for your needs.