Barbiturates are a class of prescription drugs once used more regularly for common conditions, such as anxiety and insomnia. But their potential for serious side effects and the advent of better options made them far less popular. Today, they are still used for medical purposes, especially when other options are less effective. However, they may also be used as a recreational substance that produces effects similar to alcohol and other depressants. Some side effects of barbiturates are dependence and addiction. Using the drug for too long or in high doses can cause a substance use disorder that can be difficult to overcome.

Barbiturates are a group of drugs that act as central nervous system depressants in the body, slowing down activity in the brain and body. 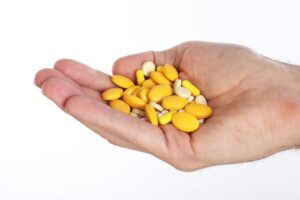 Today, barbiturates are used as anticonvulsants that can help treat muscle spasms and seizures. They may also be used as general anesthetics. However, barbiturates were once more widely used as anti-anxiety drugs and sleep aids. They were first introduced in the late 19th century and became popular drugs in the United States through the 1950s.

However, they caused significant side effects like drowsiness and sedation. They could also lead to dependence and addiction if they were used for more than a few weeks at a time. Barbiturates also have a potential for accidental overdose, which can be deadly.

The medications work by interacting with your brain’s chemical messaging system, particularly with a natural neurotransmitter called gamma-Aminobutyric acid (GABA). GABA binds to its receptors and slows down activity in the nervous system, which helps to facilitate rest, relaxation, and sleep. People with muscle spasms and seizures may have a problem that causes overactivity in the nervous system. Barbiturates bind to GABA receptors to make GABA more effective, leading to more potent relaxing effects.

However, those relaxing effects may be targeted for misuse and abuse. Barbiturates can cause potent alcohol-like intoxications. In fact, alcohol works similarly in the brain. These effects can include euphoric relaxation, inhibition release, and anti-anxiety. However, it can also cause alcohol-like side effects, such as drowsiness and poor motor control. Barbiturate abuse can quickly lead to chemical dependence, which can also cause dangerous withdrawal symptoms when you try to quit or cut back.

Barbiturate use can also cause substance use disorders and addiction that can be hard to overcome on your own. However, barbiturate addiction is treatable with the right therapies and services.

What Are the Signs of Barbiturate Addiction?

According to the Diagnostic and Statistical Manual of Mental Disorders (DSM–5), 11 symptoms point to a substance use disorder. If you experience six or more of those symptoms, you may be diagnosed with a severe substance use disorder. Four to five is a moderate disorder, and two to three is a mild disorder. The list includes biochemical signs like tolerance and withdrawal symptoms, which indicate you’ve become chemically dependent on the drug. There are also behavioral signs, such as losing interest in regular activities and struggling to maintain obligations at work, school, and home.

Addiction is often identified by cravings and compulsions to use drugs despite the serious medical, psychological, or social consequences of using the drug. Specific signs and symptoms are associated with depressant misuse. This can include signs of alcohol-like intoxication like dizziness, drowsiness, memory problems, impaired coordination, and muscle weakness.

Withdrawal is a sign of chemical dependence, which often occurs alongside addiction. Depressants have a unique set of withdrawal symptoms, some of which can be dangerous. Barbiturates slow down activity in the central nervous system, and your brain will slowly get used to the presence of the drug over time. But quitting abruptly will suddenly take away the depressant effects of the drug all at once. Since your nervous system has adapted to rely on the drug, it will suddenly go into overdrive. Unconscious functions may increase, causing an increased heart rate, fever, sweating, agitation, anxiety, tremors, shaky hands, and paranoia. In severe cases, it can cause seizures, heart palpitations, arrhythmia, and heart failure.

What Is Involved In Barbiturate Addiction Treatment?

Barbiturate addiction can be dangerous. If it’s not addressed, it could lead to overdose or long-term health problems. As a central nervous system depressant, barbiturates can cause dangerous withdrawal symptoms, including seizures and heart palpitations. The first step in getting treatment is to speak to a doctor or therapist to find out how you can begin to address your substance use disorders.

Many people who become chemically dependent on barbiturates and other depressants need to start with a detox program. Detox is an intensive inpatient treatment program that’s designed to address substance use disorders in people with high-level medical needs, especially when they are likely to go through severe withdrawal symptoms. Since depressants are among the most dangerous drugs during withdrawal, depressant addiction treatment often starts with a tapering process or detox. In detox, you may be treated with medications to help ease your withdrawal symptoms, and medical staff will attend to you 24 hours per day.

In addiction treatment, you’ll create a personalized treatment plan with the help of a doctor or therapist. This may include various therapies and treatment approaches. When you have completed detox, you may move onto the next level of care for your needs. If you still have significant medical or psychological needs, you may go through an inpatient program.

Inpatient treatment involves 24-hour medical monitoring for people with multidimensional needs. You may also go through residential care, which involves clinically managed services and on-campus accommodation. In inpatient and residential care, you’ll go through therapy sessions based on your needs. These could include individual and group therapy.

How Dangerous Are Barbiturates?

Barbiturates can be extremely dangerous when they are taken in high doses or misused. They were once more commonly prescribed, but they were replaced with other options, partly because they were known to cause accidental overdoses. If you sleepily take a second or third dose before you are supposed to, you could experience dangerous overdose symptoms. Barbiturates are more likely to cause overdose symptoms when you use them recreationally or mix them with other substances. Taking a barbiturate with alcohol, opioids, or barbiturates significantly increases your risk of deadly side effects.

Severe overdoses can slow your heart rate and breathe to a life-threatening degree. In many deadly cases, barbiturates cause respiratory depression, which is when your breathing slows down or stops completely. Respiratory depression can lead to coma, brain damage, and death. If you see signs of a barbiturate overdose, it’s important to call for emergency services immediately.

Barbiturate misuse can also cause some chronic breathing problems. If you experience an overdose and survive, you may experience lasting brain damage, muscle damage, or organ problems from oxygen deprivation. These problems may be temporary, depending on the severity of the overdose.

Barbiturate abuse isn’t as common as it was when the drug was more regularly prescribed. But prescription sedatives are commonly misused. According to the 2020 National Survey on Drug Use and Health, 2.2% (6.2 million) of people 12 years old and older reported misusing prescription sedatives like barbiturates, benzodiazepines, and others a year before the survey.

Around 1.2 million of those people developed substance use disorders related to sedatives like barbiturates. Sedatives have contributed to the overall overdose death rate in the United States, especially when they are mixed with opioids.