In another generation, barbiturate drugs were created to treat sleeplessness, anxiety, and seizure disorders. When introduced to the general public, these miracle drugs provided relief no one had experienced before. Word spread throughout communities that there was finally a solution for people who were struggling with these ailments. We take many of our modern advances for granted, and many of us can fathom the thought of having nothing to help us with our issues.

However, despite the revolutionary advancement in medicine, it wasn’t without its problems. It was found that barbiturates caused more of a headache than they solved, leaving experts to seek new methods. After much trial and error, benzodiazepine drugs were introduced and branded as a “safer” alternative to barbiturates that offered the same benefits.

Unfortunately, benzodiazepines haven’t quite lived up to the reputation they had set for themselves upon their debut into the world. When benzodiazepines appeared in 1960, they were branded as a less addictive and safer alternative that provides similar benefits, treating anxiety, insomnia, and seizure disorders. Chemist Leo Sternbach at the Swiss drug firm Hoffman-La Roche is responsible for the first benzodiazepine called Librium. However, it soon became clear that Librium and other benzodiazepines in the family were as addictive and equally as dangerous with challenging withdrawals. Even with that, benzodiazepines are the pharmaceutical industry’s top-selling family of prescription drugs today.

Estazolam is another popular benzodiazepine used to treat sleeplessness, anxiety, seizures, and other conditions. However, like other drugs in this category, it carries the risk of dependence, addiction, and severe withdrawal symptoms upon cessation. Estazolam addiction can be serious if left untreated. If you’ve been using estazolam and have noticed issues when reducing your dose or stopping altogether, it could indicate you need professional help. We’ll go over the process below. 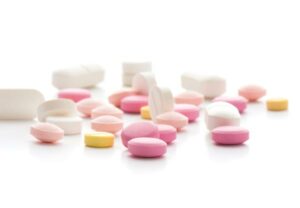 Estazolam isn’t much different than other drugs in its category. However, it’s considered a short-acting benzodiazepine, meaning it’s a better option for treating anxiety than a long-acting drug in the same class. Benzodiazepines are central nervous system (CNS) depressants that can only be obtained with a valid prescription from a licensed physician and belong to a broader category of substances known as depressants. Other depressants include barbiturates, alcohol, and opioids. However, opioids don’t cause the same and potentially deadly withdrawal symptoms as the others.

Depressants like estazolam depress the excitability of your central nervous system. People with a chemical imbalance in their brains cannot produce the proper amount of GABA, a naturally occurring neurotransmitter responsible for calming your nerves and helping you fall asleep. When you cannot achieve that due to a lack of GABA, drugs like estazolam are prescribed to stimulate the receptors and flood the nervous system. It results in the ability to relax cognitively and physically. However, the substances also produce feelings of euphoria, which is what people are known to chase.

The primary issue with estazolam and other benzos is how quickly someone can become tolerant of its effects. The drugs should never be prescribed for long-term use. Doctors from Yale Medicine said that 50 percent of patients prescribed benzodiazepines become dependent on them in four weeks. The first sign you’ve developed an issue is when the initial dose you took doesn’t ease your anxiety or help you sleep, leading you to take more. The next sign is when you experience withdrawal symptoms if you miss a dose. The final stage is addiction.

The experts at Yale Medicine are also sounding the alarm of a potential benzodiazepine crisis, similar to what we’re experiencing with opioids. Between 1996 and 2013, the number of prescriptions for drugs like estazolam and other benzos rose by 67 percent to 135 million prescriptions, tripling from years past. For that reason, knowing the signs and symptoms of estazolam addiction and what to do is the difference between life and becoming a statistic.

What Are the Signs of Estazolam Addiction?

We understand the unique challenges of determining whether you’ve become addicted to a drug. There is a fine line between therapeutic use and addiction. It’s easier to justify the use of a drug like estazolam because your doctor wrote a prescription for it to treat a genuine condition you’ve endured for who knows how long. Unfortunately, that doesn’t mean the drug is safe. It means the doctor weighed the pros and cons and determined that your disorder was severe enough to warrant extreme treatment. For that reason, admitting a problem exists is quite the hurdle to overcome.

If you’ve reached a point where you know you’re addicted, but you’re afraid to speak out, you’re not alone. Fortunately, Summit Behavioral Health’s staff is ready to take on the challenge of getting you sober. One obstacle to getting sober is wondering how to treat your anxiety or insomnia without estazolam. Fortunately, alternatives to benzodiazepines are available and can help you treat your ailment. However, in the meantime, you must pay attention to any signs and symptoms of estazolam addiction.

Some signs unique to estazolam addiction are:

While those are unique to estazolam, some general signs of addiction your loved one might display are:

What Is Involved In Estazolam Addiction Treatment?

As was mentioned above, if you’ve fallen into the cycle of addiction and don’t know how to admit it, it’s OK. We’re here to help. Estazolam addiction can be dangerous and lead to a potentially deadly cycle. One issue unique to benzodiazepines is when you run out, it’s more than getting sick—you can endure seizures and die. For that reason, people are more daring and will commit serious crimes to get the money that funds their drug habit. For that reason, getting the necessary help is quite literally the difference between life and death.

The first step in the continuum of care is medical detox. The process lasts anywhere between three to seven days. During your admission, you’ll be thoroughly assessed by staff to determine your overall health and what drugs you’re using. From there, they’ll create a treatment plan tailored to your specific needs. Please note, these are subject to change if you’re not responding to them. You will then enter detox for a few days until you’re medically cleared by the staff. You should never undergo this process alone. The team will administer medication that lessens your symptoms and monitor you around the clock. Withdrawal is unpredictable, so having doctors around you will ensure there is some predictability to the process.

The following step is to understand why you began abusing drugs in the first place. Do you have a history of trauma? Did you just like the feeling? These are questions we can’t answer in detox, so committing yourself to intensive therapy is important to safeguard your sobriety in the long term. Addiction is a disease that requires lifelong management, and you must go through inpatient or outpatient care that helps you prepare for the triggers you’ll face and help you understand why they’re triggers. From there, you’ll be released, but you must go through 12-step programs and surround yourself with positive influences to avoid relapsing.

How Dangerous Is Estazolam Overdose?

It’s important to mention that, no matter the drug, an overdose can be fatal. Estazolam overdose is no exception to the rule. If you or someone you know is prescribed estazolam or they’re misusing the drug, knowing the signs of an estazolam overdose can save a life or prevent permanent damage. If you witness any of the following symptoms, please call 911 right away. Seconds matter when it comes to an overdose.