Disulfiram: Is It Effective for Alcoholism?

Disulfiram is one of a few medications approved to treat alcohol use disorders, but it is often ineffective due to issues with compliance.

The Substance Abuse and Mental Health Services Administration (SAMHSA) and the National Institute on Drug Abuse (NIDA) consistently report that medication-assisted treatment (MAT) can assist in recovery from substance use disorders. These organizations steadily report that MAT is an adjunctive treatment. In other words, MAT is just one part of an overall treatment program that should include substance use disorder therapy, group work, and case management services, among other aspects. One of the oldest forms of MAT is the medication disulfiram, better known by the trade name Antabuse.

The interaction between disulfiram and alcohol was discovered accidentally when factory workers who were working with the chemical tetraethylthiuram disulfide began to feel physically ill after drinking alcohol. Later on, research with disulfiram confirmed that individuals who consumed alcohol while using the drug became ill.

Disulfiram became the first medication approved by the  U.S. Food and Drug Administration (FDA) for the treatment of alcohol abuse. Currently, there are only two other medications that have FDA approval for the treatment of alcohol abuse. The drug was never considered to be a cure for alcoholism. There is no cure for addiction. It can be used to help manage alcoholism.

Disulfiram is only effective when used in combination with an overall treatment program.

The process of metabolizing alcohol includes the conversion of alcohol into the substance acetaldehyde. Then, acetaldehyde is converted into acetic acid.

The process by which disulfiram is designed to reduce alcohol consumption is known as aversion therapy, a type of treatment or learning where individuals are punished for engaging in a particular behavior. When an individual is taking disulfiram, they receive negative consequences, or punishments, when they ingest alcohol.

Punishments are interventions that are designed to decrease the repetition of a particular action or behavior. Through this mechanism, Antabuse is designed to reduce alcohol intake.

What are the Effects of Drinking While Taking Disulfiram?

The effects of drinking alcohol while taking disulfiram can vary among people. Regardless, the quantity and intensity of the reaction occur as a result of the drug blocking the metabolism of alcohol.

Most individuals begin to experience ill effects within minutes after consuming alcohol. Any combination of symptoms can occur.

Individuals prescribed Antabuse usually take the drug in tablet form once per day and most often in the morning.

In some cases, the drug may be injected. The maximum recommended dosage is 500 mg.

What Are Some of the Restrictions of Antabuse Use?

The general recommendation is not to take Antabuse for at least 12 hours after drinking alcohol. This includes over-the-counter products that contain alcohol, such as mouthwash, cough and cold medications, salad dressings, and other products.

Certain prescription medications may result in adverse reactions when one is using Antabuse. Examples include antidepressants like Elavil or even anticonvulsant medications like Dilantin.

It is crucial that individuals who are taking Antabuse provide a complete list of their medications to their physician. This helps to avoid unwanted reactions.

Is Antabuse a Potential Drug of Abuse?

For most people, taking Antabuse alone does not result in any feelings of euphoria or significant psychoactive effects.

The drug does not produce physical dependence.

Because of potential untoward interactions, the drug can only be obtained with a prescription from a physician and should only be used under the supervision of a physician at all times.

Is Disulfiram Effective in the Treatment of Alcohol Use Disorders?

The half-life of disulfiram ranges between 60 and 120 hours in most individuals. The major problem with the use of disulfiram is the tendency for individuals with alcohol use disorders to not comply with regular use of the drug.

Research has indicated that the effectiveness of disulfiram in the treatment of alcohol use disorders is inconsistent at best. This is because individuals will stop taking the drug one to two days before they plan to drink alcohol and fail to experience significant effects as a result.

Meta-analysis is a technique that combines the results of many similar studies to determine if the intervention has an overall effect across a body of research. 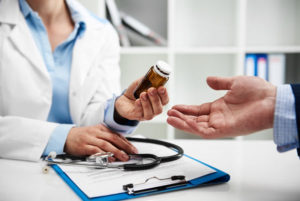 A 2011 meta-analysis indicated that disulfiram does lead to greater short-term periods of abstinence compared to a placebo. However, its long-term effects were not well researched.

When compared to a placebo, the use of disulfiram also appeared to be associated with longer periods of abstinence in people who later relapsed.

A 2014 meta-analytic study indicated that disulfiram was slightly more effective than naltrexone and acamprosate in reducing the amount of alcohol consumption in individuals with alcohol use disorders. However, the drugs were ineffective when the individuals did not know what drug they were taking.

Disulfiram appears to be most effective when individuals are informed about the effects of the drug they are using.

In 2017, an interesting study reported in Drug and Alcohol Abuse confirmed the findings of many other previous research studies regarding the effectiveness of disulfiram. Individuals who were self-referred for treatment of their alcohol abuse experienced significantly less success using disulfiram than individuals who were coerced into treatment and monitored for abstinence.

Thus, the biggest factor affecting the success of disulfiram appears to be one’s level of motivation to remain abstinent.

What Does the Research Tell Us?

Research Regarding The Use Of Disulfiram To Treat Alcohol Use Disorders Is Quite Clear.

How to Use Disulfiram

Individuals who want to use disulfiram to overcome alcohol abuse issues should be involved in a full substance use disorder recovery program that contains all the effective components of successful treatment. In this program, there should be some type of monitoring system to ensure the person is maintaining their abstinence.

Long-term recovery requires a commitment to abstinence and continued participation in treatment.

Because disulfiram is a prescription medication and the biggest drawback to its use is compliance, people should only use the drug under the supervision of a physician. People should also be involved in therapy.

Those getting the drug illegally and attempting to use it without professional supervision will inevitably not benefit from its use.