What are Opioid Replacement Drugs?

The need for opioid replacement drugs has never been higher as the country faces a crisis like no other. Opioids have become as prevalent in our society as substances like tobacco or alcohol, and that’s not a good thing. Heroin, fentanyl, and prescriptions opioids are among the most dangerous drugs on the planet and the numbers back up those figures. Every day, more than 130 people die in the United States as a result of a deadly overdose, and despite the collective effort among our leaders, there has not been a significant decrease in these statistics.

A new article released by CNBC highlights how more millennials, and generation Z are using, and it has led to a sharp increase of teens and young adults dying. Death rates rose by 19.75 percent from 2006 to 2015. The study shows that the surge in drug poisoning deaths among adolescents and young adults reflects the ease of access to pharmaceutical drugs, especially prescription opioids and later transition to more potent opiates.

Tightening the screws has reached a federal level, and last week 60 doctors, pharmacists, and other licensed medical professionals across five states were charged in connection with illegal prescriptions of more than 32 million pain pills. In addition to these most recent allegations, some 1,600 cases against OxyContin-maker Purdue Pharma and other opioid manufacturers are being consolidated and transferred before a judge in Ohio, New York, and other states.

The President has also weighed in declaring to combat the opioid crisis from every angle. Trump goes on to say, “my administration is deploying every resource at our disposal to empower you, to support you and to fight right by your side. We will not solve this epidemic overnight but, we will stop. There’s just nothing going to stop us, no matter how you cut it.”

The one sign of progress has been the mass reduction in the number of prescriptions for painkillers, but opioid abuse still killed a record 48,000 people in 2017. An estimated two million people are addicted to drugs, which include both legal prescription pain medications and illegal drugs such as heroin or fentanyl.

Initially, it was prescription painkillers that were responsible for the high volume of death, but as we see a squeeze in the supply by doctors, it has transitioned to illicit street drugs. With the emergence of fentanyl, it has become even darker and may explain the recent spike despite the collective effort. The Trump administration has committed $6 billion to combat the crisis, which includes money allocated toward treatment, programs that prevent youth substance abuse and increase the distribution of the overdose-reversing drug known as Narcan or naloxone.

The one silver lining we can see from all of this is the increased pathway to treatment. More research has gone into how to treat addiction, and rather than someone who uses drugs, addiction is finally being viewed as the disease it is.

Additionally, more funding has gone into studying the effects of opioid replacement drugs, as well as Medication-Assisted Treatment to help stave off drug cravings. While all of us are different, each drug they consume may affect them differently. Let’s take a look at some of the opioid replacement drugs that are helping in the fight against opioid addiction.

The traditional means of treating opioid addiction, specifically, is an inpatient program at a residential treatment facility. The process starts with medically supervised detox to help the client overcome the worst of their withdrawal symptoms. It will be followed by aftercare and the possibility of time in a halfway house or sober living facility.

While residential programs have been proven to be effective for many of those struggling with addiction, no single treatment works for everyone in active addiction. It’s crucial for there to be various recovery treatments at their disposal to account for their diverse needs.

Opioid replacement therapy is considered an alternative to more traditional treatment programs, but it has been very controversial since its introduction. Some are advocating for its efficacy while others vehemently reject the relatively newer method.

What are Opioid Replacement Drugs?

Opioid replacement therapy, also known as medication-assisted treatment, has emerged as a viable treatment option for those with opiate addictions. By definition, replacement therapy refers to treatment where the individual replaces an illicit opioid with a non-euphoric, longer-acting opioid. The person in question will be administered the substitute opioid under medical supervision. It has been proven to keep individuals to not only to stay in treatment but remain there longer while getting to the root of their addiction.

These medications have various effects, and some inhibit a euphoric response to opioids while others will act as a replacement of the opiate of choice entirely.

Vivitrol is considered an opioid-blocking medication, which means it prevents any euphoria or pain-relieving feelings that occur when using illicit drugs. It can be administered as an injectable via intramuscular gluteal injection or taken daily as an oral medication. It has been proven effective in the treatment of alcohol addiction as well.

Since Vivitrol removes the rewarding feeling from opioids, it will not counteract their effects. What this means is that if you use any type of opiate drugs, you can potentially overdose. In fact, the chance of an overdose is increased because you will not feel the effects of the drugs you’ve consumed, which can make it next to impossible to stop.

Those who seek Vivitrol treatment are required to be free of drugs for at least two weeks prior to treatment, and that can be a problem for someone with a severe addiction.

Suboxone is one of the most recognized means of treating opioid addiction.

Suboxone has been used for many years in medical detoxes and has been viewed as a ‘step-down” methods when abstaining from the drugs. 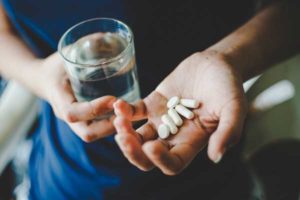 Many of those in recovery are slowly weaned off opioids with a Suboxone taper.

Suboxone is a combination of buprenorphine and naloxone, and it acts as an opioid blocker, which negates the use of any opiate.

Suboxone is a popular opioid replacement drug because it’s long-term use does not damage internal organs.

It does not provide its user with an intoxicating effect, making it a highly sought out replacement drug.

Despite this, dependence can still occur as a result of the medication.

Methadone is a drug that has been under intense scrutiny for its side effects. Methadone is available as a tablet, liquid, or an injectable. It’s an opioid blocker, and its purpose is to reduce drug cravings and withdrawal symptoms. It must be taken once a day and works for 24 to 36 -hour increments. It can only be administered by a licensed medical health professional at designated dispensaries known as methadone clinics.

Since you must be on-site to receive the medication, you must visit the clinic daily. After some time, however, the doctor may allow you to take a small number of doses home with you occasionally, but that is not always the case. It’s a big commitment because you cannot miss a single dose.

There are various other factors to take into consideration when using methadone. If consumed incorrectly, overdose can occur. Over the past 10 years, methadone overdose has increased by 5.5 times. Physical dependence on the medication is inevitable, and should treatment ever need to stop an intense withdrawal process may begin abruptly.