What Happens When You Mix Oxycodone and Alcohol?

Mixing oxycodone and alcohol is dangerous.

Both opioids and alcohol slow your breathing. Taking both at once presents a real danger of overdose.

Oxycodone is a prescription opioid, prescribed to people with severe pain problems. It addresses pain by triggering endorphins in the brain, blocking pain sensations and promoting a sense of well-being.

As with any opioid, doctors and users must be careful. Oxycodone has a real risk of causing physical and psychological dependency.

Oxycodone is intended for severe pain. According to Mayo Clinic, it is specifically prescribed when other painkillers (also called narcotic analgesics) are ineffective.

It is inappropriate for most people’s pain, even if that pain is still affecting the quality of life. If you suffer from such pain, consult a doctor about your options. Non-opioid medications will likely first be used.

People may abuse oxycodone for the numbness it can cause and the sense of euphoria it brings. They can grow psychologically and physically dependent from there — chasing the high of opioid-induced well-being while trying to avoid withdrawal. Opioid addiction is not easy to overcome, but it’s possible with professional help.

Alcohol is a common depressant that causes a temporary stimulant effect in those who drink it. Despite being widely available, it can still be dangerous and addictive if abused.

Alcohol abuse is quite common. Even people who are not addicted to it may abuse it recreationally to the point of extreme intoxication or even passing out.

Both oxycodone and alcohol can be dangerous when used in large quantities on their own. Taken together, as they often are, the potential for a fatal outcome increases.

Never drink alcohol while taking any kind of drug without familiarizing yourself with the drug’s interactions. These are often listed on the bottle, but not always. You should also consult your doctor before drinking if you are taking any medication.

Oxycodone should never be combined with alcohol, even a small amount.

Both opioids and alcohol can lead to potentially dangerous and even fatal overdose when abused individually. These drugs are even more dangerous when taken together.

Both oxycodone and alcohol affect the nervous system.

While their effects on the body are not identical, they have some overlapping effects that can be deadly when combined.

They both slow down breathing rates. In the case of an overdose, they can slow breathing to the point where the body is not receiving enough oxygen. When the medications are combined, the effect on the respiratory rate is compounded.

This effect alone is reason enough to avoid taking these substances together. There are further layers to the danger. 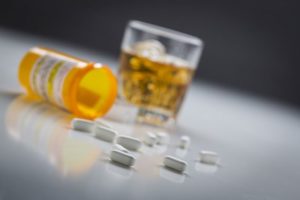 First, alcohol and opioids both affect judgment and decision-making processes. Even if you have the capacity while sober to perhaps judge your drug use, your ability to balance a high with the risks of an overdose will fade as the effects of both drugs take hold.

Second, alcohol has a notable delay in how it affects the body. It is pretty easy to misjudge how much you drink, especially if you are already high on oxycodone. People often drink alcohol quickly, only to suddenly be hit with the effects of their drinks all at once.

They find themselves severely and potentially dangerously intoxicated.

When you add in other substances of abuse, all these effects are heightened. A person may experience a significantly higher level of intoxication with fewer drinks if they are taking oxycodone. This can quickly turn into an overdose.

Drug abuse is never advisable. When you take high doses of a substance or use it frequently, you risk damage to the body and brain, including the possibility of overdose.

Mixing drugs add another layer to the danger. Drug interactions are not easy to predict.

People are also trying to assess these predictions while high. They are significantly less capable of rational decision-making, and this is a recipe for disaster. Choosing to mix drugs could literally kill you.

Alcohol and oxycodone have a confirmed dangerous interaction. Mixing these drugs in any amount could be incredibly dangerous.